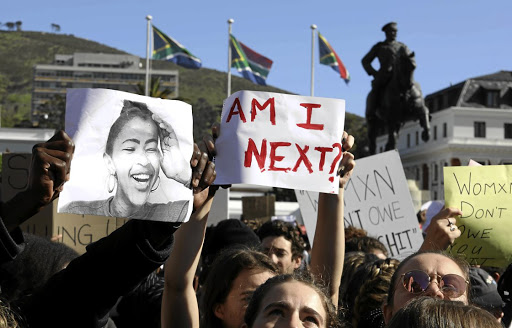 Uyinene Mrwetyana, pictured, was raped and killed by a man in the same week aspiring boxer Leighandre Jegels was killed by her ex-boyfriend. / ESA ALEXANDER

The month of September marks the beginning of spring, a time of new beginnings; a time when flowers come into bloom, turning a rather drab world into a kaleidoscope.

In short, spring is the time of hope.

Yet as we hurtle into spring, it is as if, as a nation, we have been kicked in the butt by the devil himself.

Our cities and townships, our villages and farms are splattered with blood instead of the splash of colourful flowers.

In KwaZulu-Natal we are burning trucks and barricading roads.

In Johannesburg we are burning buildings, stoning cars, looting shops - especially those belonging to foreign nationals.

There's mayhem in the land.

Man shot and killed in Hillbrow
News
2 years ago

But most remarkable is the sudden upsurge in femicide and infanticide.

Although the killing of women and children is not a new phenomenon, it is the frequency with which these killings are taking place, and the blas� attitude we assume that worries me. A woman gets raped viciously and killed. We mouth a few platitudes, shrug our shoulders, and move on.

It is enough. But it won't stop until we tell the truth. In all these instances of rising levels of violence, the perpetrator is a man. Always.

Uyinene Mrwetyana was raped and killed by a man. As was the aspiring boxer Leighandre Jegels who was killed by her ex-boyfriend.

There are hundreds of other women who get killed every month whose names the general public will never know. They get killed by men.

'It could have been me': A chilling encounter with the 'post office killer'

Just days before UCT student Uyinene Mrwetyana was raped and brutally murdered inside a post office her alleged killer tried to convince a female ...
News
2 years ago

Yet in our public pronouncements we pretend as if these people are being killed by a faceless ogre from outer space. No. The ogre is the man who is reading this.

The perpetrator is every South African man. Those not directly involved are complicit, many times through silence or inaction.

We know the man next door is abusing his wife or his children, but we look the other way. Until it is too late; until the man has killed the long-suffering woman or child.

When a rape takes place in our midst, we shrug and tell ourselves: "It's not our problem."

The attitude reminds me of that unforgettable utterance by Reverend Martin Niemoller who, after the slaughter of millions of Jews by Adolf Hitler's Nazi regime, confessed, taking partial responsibility for the murders.

What Niemoller was saying is simply that, as a priest, he could have spoken out right from the beginning. Perhaps his voice and that of many like him could have slowed down, or even stopped the Nazi juggernaut. But he chose silence, because what was happening was not his problem.

What can a man do? Speak out immediately when you witness abuse. But more importantly, start by teaching your own sons to treat girls and women with respect. It goes a long way.

But the government must also come to the party. Domestic violence and sexual abuse cases should be given priority, and perpetrators sent away for a long time. Before they become killers.

Yes, the wounds are already very deep, but the situation can still be reversed, if only there is a political will to do so.

Thousands of Capetonians refused to sing the national anthem and booed President Cyril Ramaphosa when they gathered outside parliament on Thursday to ...
News
2 years ago

President Cyril Ramaphosa says South African men must hang their heads in shame over the continued killing of women.
News
2 years ago
Next Article