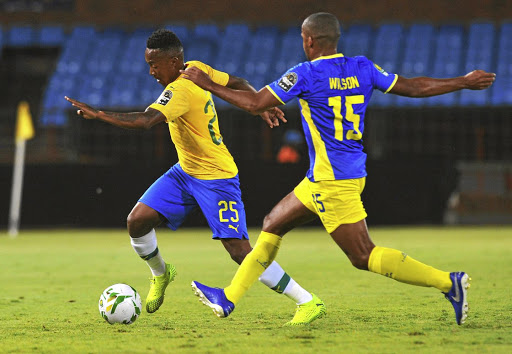 Mamelodi Sundowns attacker Lebohang Maboe is excited by the extra fire-power the team has in the striking department this season.

Last season, the attacking midfielder was the team's main striker as coach Pitso Mosimane converted him to lead from the front.

This season, it appears Maboe will be converted back to midfield after the club signed powerful Uruguayan forward Mauricio Affonso.

"Last year I had a very heavy workload, hence I was so fatigued and out for a couple of weeks. This time the club has signed Affonso and a guy like Ali Meza is also playing as a striker," Maboe told Sowetan.

"The competition this season will be tougher, which is good for the team. Due to the high number of games we play it's good to have a strong strike department, so I am looking forward to our continental campaign and the rest of the domestic season."

The 25-year-old adds that he has no problems operating in either position.

Mamelodi Sundowns are about to begin the treacherous CAF Champions League journey that will be so demanding this year that they will spend Christmas ...
Sport
1 year ago

"As a versatile player, you have to be able to play anywhere at any time. By now I am used to being played in different roles," he said.

"I am comfortable wherever the coach wants me to play. Whether I am in midfield or as a striker, I'll do whatever needs to be done."

Maboe, together with Hlompho Kekana, made the most appearances of any two players at the club with a staggering 45 appearances in all competitions last season.

In the CAF Champions League, Maboe scored only a single goal in 12 appearances. With Sundowns set to face Wydad Casablanca in a Group C clash on Saturday, the Heidelberg-born ace is eager to have an impact against the Moroccans.

"It's never easy going to play there and coming back with a win. Knowing that we haven't got a win there, it is going to be as difficult as they have always been," he said.

Why Mosimane became emotional when he saw Percy Tau on television