Violent protests in which motorists were stoned, trucks set alight and roads closed have been "temporarily suspended" in and around Dunoon in Cape Town after taxi bosses apologised to the community in the affected area.

Protest action, allegedly orchestrated by illegal minibus taxi operators, closed down the N7 highway as well as the road past Dunoon sporadically for almost a week. Passing vehicles were stoned and five schools in the area were prevented from opening.

The SA National Defence Force rolled into the area on Tuesday to help police and metro police with a crackdown on crime.

Residents, business owners and community leaders attended a meeting on Tuesday evening in a bid to stem the disruption. Ward councillor Lubabalo Makeleni said  pressure from the community ultimately forced the taxi operators to bring the chaos to a halt. 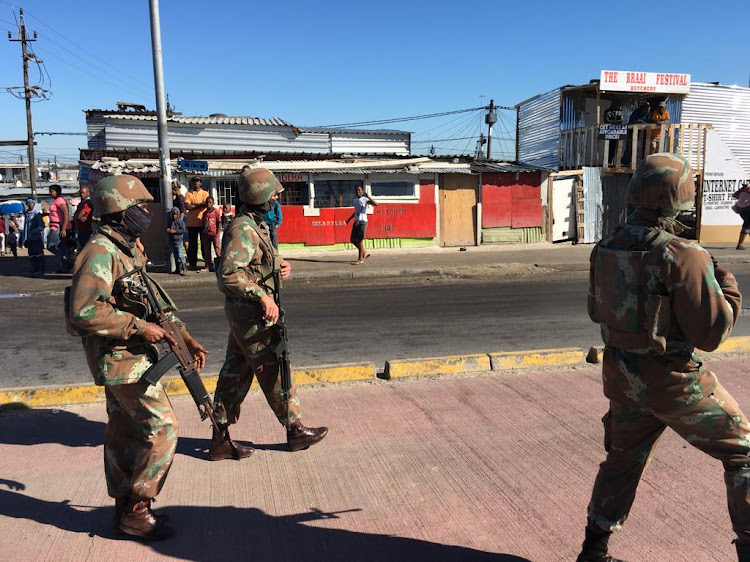 "Taxi owners basically apologised for the inconvenience and the community accepted. It is business as usual this morning," he said on Wednesday. "Children are writing exams, people need to go to work, to hospitals," he said. "We cannot tolerate this lawlessness."

He said that stakeholders in the dispute could now work towards finding a resolution.

"We agreed that we would form a committee that would look into into the issues," he said.  "We have requested a meeting on Thursday morning with [mayor] Dan Plato, we are awaiting his response."

Although an undertaking was made to stop closing roads and causing disruption, Makeleni warned that the impasse would remain until all stakeholders found a way to communicate more effectively.

A truck was set alight and several roads were blocked with burning tyres in Cape Town on Monday afternoon.
News
2 years ago

"The strikes are temporarily suspended. If the city doesn't want to come on board and see how bad the situation is, then the community leaders won't be able to intervene to resolve the protests again," he said.

"The city must not be arrogant, they must listen [to the demands being made by the taxi operators]. The taxi bosses are sending communication to the city and not getting any response."

Mayoral committee member for safety and security JP Smith saw the situation differently, saying that the violence over the past week was nothing short of "rioting", while he insisted that it was law-enforcement agencies that had brought calm to the area.

"There is no taxi strike. There was an illegal and violent riot by illegal taxi operators who wanted to be exempted from enforcement of road rules," he said.

"The joint operation yesterday by traffic, law enforcement and metro police, with SAPS and the military, brought that to a definitive halt."

Vehicles were stoned as violent protests flared up for a second day on Friday at Dunoon in Cape Town.
News
2 years ago

A truck was torched and police are on high alert in Cape Town after a public meeting in Hangberg, Hout Bay, where a service delivery discussion ...
News
2 years ago

Motorists were stoned and a petrol bomb was hurled at a vehicle on the the N2 outside of Cape Town on Sunday night as protesters wreaked havoc and ...
News
2 years ago
Next Article