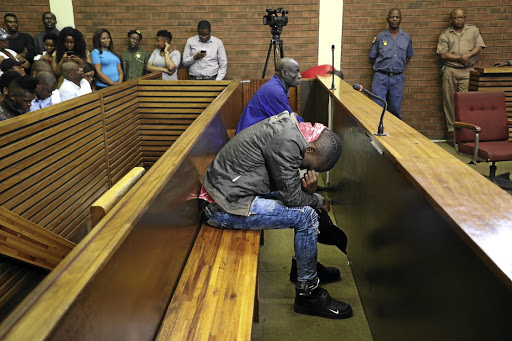 The two accused for the murder of seven people in Vlakfontein appeared in the Lenasia magistrate's court yesterday.
Image: Thulani Mbele

Two men accused of killing seven family members in Vlakfontein, south of Johannesburg stood side by side in the dock with their feet chained, not interacting with each other.

Sixty-one-year-old Fita Khupe, who is said to be from Mozambique and living legally in SA, and a 27-year-old illegal migrant from Zimbabwe face charges of seven premeditated murder in the Lenasia Magistrate's Court yesterday.

The 27-year-old had been welcomed into the Khoza home after he claimed to be a relative of the family.

On Monday, however, the court heard that the name he had given the family, Sibusiso Khoza, was not his real name.

He was, in fact, an illegal migrant from Zimbabwe. He was arrested last week Thursday in Mpumalanga, near the Lebombo border post with Mozambique.

He was found in possession of bank cards belonging to two of the seven victims, Captain Mavela Masondo said ahead of the court proceedings.

Lekotje lost daughter (13) in murder of seven.
News
3 years ago

He also faces an additional three charges of rape. According to National Prosecuting Authority spokesperson Phindi Mjondondwane, he is alleged to have raped one child and two adults from the Khoza household.

The second accused, Khupe, has been in SA since 1975, and is in the country legally.

According to community members of Vlakfontein who were present in court, Khupe had been involved in a romantic relationship with one of the Khoza women. The community had known him as Dan.

Both are represented by Legal Aid. The matter returns to court on November 12.

Meanwhile, back at the Vlakfontein home where the bodies of the seven were found buried under piles of sand inside their home, the large gate was padlocked.

A burnt mattress and folded carpet lay rolled outside while the dustbin was filled with debris, including empty containers.

Neighbours said there had been little activity since the weekend as the family had left for the burials in Pietermaritzburg.