Two to appear in court for Vlakfontein killings 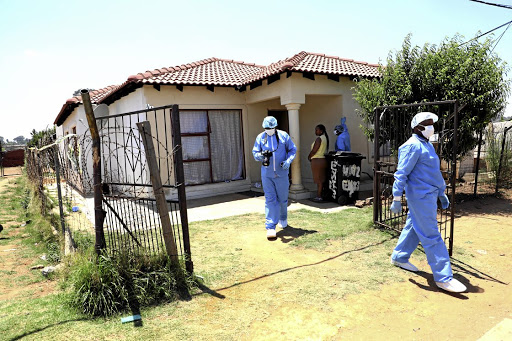 A forensics team at a house where seven people were killed.
Image: SANDILE NDLOVU

Two men will today appear in the Lenasia magistrate's court in connection with the murder of seven members of one family in Vlakfontein, south of Johannesburg.

The arrest of the two, aged 61 and 27, follows the gruesome discovery of seven decomposing corpses at a Vlakfontein house last week.

Gauteng police spokesperson Mavela Masondo said their team of senior investigating officers made the two arrests on Saturday near the Lebombo border crossing post in Mpumalanga and in Dobsonville, Soweto.

Masondo said an investigating team focusing on serious and violent crimes responded to information which led them to Mpumalanga, where the 27-year-old was arrested.

Two people have been arrested in connection with the murder of three women and four children at a house in Vlakfontein‚ south of Johannesburg.
News
3 years ago

He was found with bank cards allegedly belonging to two of the seven victims.

Vlakfontein residents who had been concerned about a rotting stench coming out of the house for days were shocked when police made the gruesome discovery of the dead, aged between two and 50, last Monday.

Gauteng community safety MEC Sizakele Nkosi-Malobane later revealed sharp objects were used in the murders of the seven people, including the children.

When asked if the suspects were related to any of the victims, Masondo said: "On how are they related, that will form part of the investigation."

Maj Gen Max Masha, acting police provincial commissioner, said: "These arrests will go a long way in proving to those who continue to undermine the authority of the state, that police mean business when we say that we will prioritise cases against women and children."

Masha said the investigating team would ensure that they presented a watertight case that would secure a conviction.