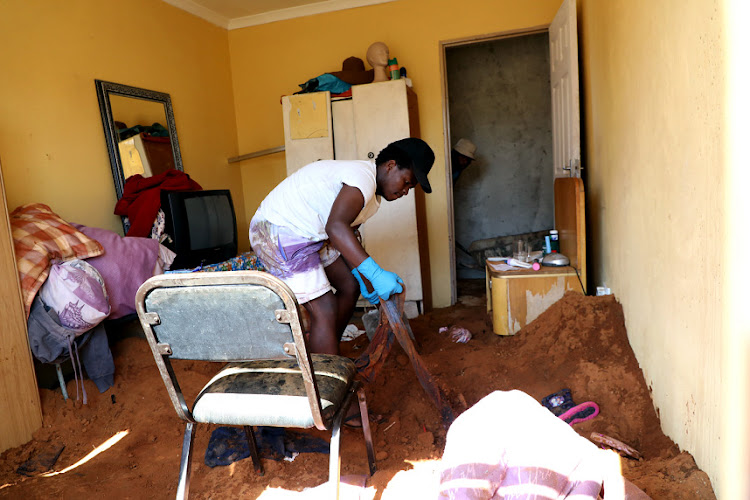 Bongani Letele helps remove the soil that was used to cover four bodies in the house at Vlakfontein.
Image: SANDILE NDLOVU

Sharp objects were used in the murders of seven family members whose bodies were found in a house in Vlakfontein‚ south of Johannesburg‚ on Monday.

The revelation was made by Gauteng community safety MEC Sizakele Nkosi-Malobane during a visit to the house on Wednesday afternoon.

Despite several days having passed since the bodies were found‚ there was still a strong stench at the house.

Nkosi-Malobane said that she didn’t want to reveal too much about the investigation‚ which was still ongoing‚ but said that sharp objects had been used to kill the family members.

She also expressed confidence that justice would prevail.

The gruesome discovery was made on Monday‚ with some of the family members found buried under sand in the Vlakfontein house.

A family member told the publication that one of her relatives had sent a frantic message in the moments before her death‚ telling her that she was going to die.

During Nkosi-Malobane’s visit‚ a community member‚ Thulani Mbatha‚ said residents had long been calling for assistance – but that those calls had fallen on deaf ears.

“We are angry‚ very angry we want justice to prevail. They did not deserve to die‚ not like this‚” he said.

“This is not the first incident in this area. Why did the MEC have to come now that seven people have died? We want her to engage us and provide us with answers. Gender-based violence is very high in this area‚ it's like our cries are falling on deaf ears‚” Mbatha added.