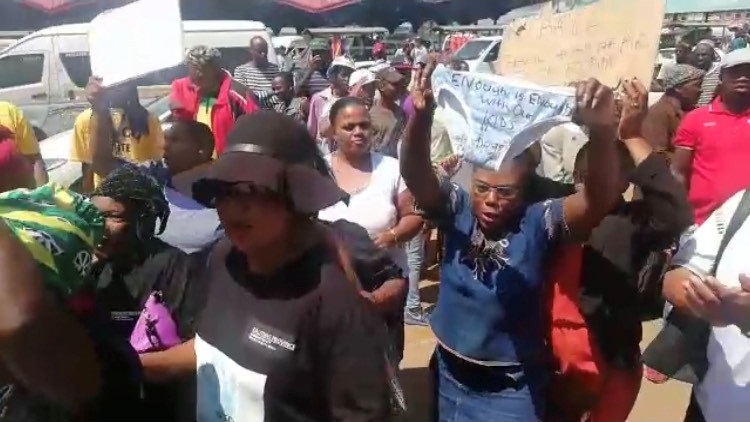 Community of Vlakfontein outside the Lenasia Magistrate's Court where two suspects linked with the killing of seven family members are appearing.
Image: THULANI MBELE

Residents of Vlakfontein‚ south of Johannesburg‚ gathered at the Lenasia Magistrate’s Court in their numbers on Monday‚ ahead of the appearance of two men who were arrested in connection with the murder of seven of their neighbours.

“No bail for killers”‚ “throw away the keys”‚ “no tv‚ no food‚ no special treatment”‚ were some of the slogans written on their placards.

The group‚ many of whom were dressed in political regalia‚ sang struggle songs on the steps of the court and blew whistles. A woman in the crowd lifted a child’s underwear garment into the air. Community member Thokozani Nkomo said that he was there in solidarity with the family as he knew all of the deceased – three women and four children.

“We lived with these people. They deserve justice‚” he said. “I have faith that justice will prevail.”

Two to appear in court for Vlakfontein killings

Two men will today appear in the Lenasia magistrate's court in connection with the murder of seven members of one family in Vlakfontein.
News
3 years ago

Security was expected to be tight for the appearance of a 27-year-old man and his 61-year-old co-accused. The suspects were arrested late last week‚ said police spokesman Captain Mavela Masondo.

"The provincial team investigating serious and violent crimes… responded to information which led the team to Mpumalanga‚ near the Lebombo border post. A 27-year-old male suspect was arrested and in his possession were bank cards belonging to two of the seven victims‚" said Masondo.

"On further investigation‚ a second suspect‚ a 61-year- old male‚ was traced and arrested in Dobsonville (Soweto).”

Masondo said the 27-year old would face an additional charge of rape. The death of the seven family members shocked the nation. They were found murdered with “sharp objects” and buried under piles of sand at their home on Monday‚ October 29.

Speaking at their funeral on Sunday‚ Minister for Women in the Presidency Bathabile Dlamini said it hurt that the victims were allegedly harmed by a person they regarded as family.

The funeral was attended by provincial and regional government leaders.

The bodies of the deceased were brought to the venue briefly before the burial‚ owing to their state of decomposition.

They were laid to rest at Mountain Rise cemetery in Pietermaritzburg.

It was reported last week that one of the murdered women‚ Nomfundo Khoza‚ had sent frantic WhatsApp messages to her family moments before she died‚ but when they phoned back there was no answer.

“We could not understand her WhatsApp messages‚” said a relative‚ who did not want to be named. “It was something about her dying and being in danger. We called her and she did not pick up. That’s when we felt something was really wrong.”

Neighbours noticed a stench‚ which led police to the bodies.

Two suspects in the murder of seven family members in Vlakfontein appeared in a court filled with angry community members, at the Lenasia Magistrate’s Court on Monday November 5 2018. Among the community was the father of one of the three children who were slain who said he would post the bail if it was granted to the perpetrators.

Two people have been arrested in connection with the murder of three women and four children at a house in Vlakfontein‚ south of Johannesburg.
News
3 years ago