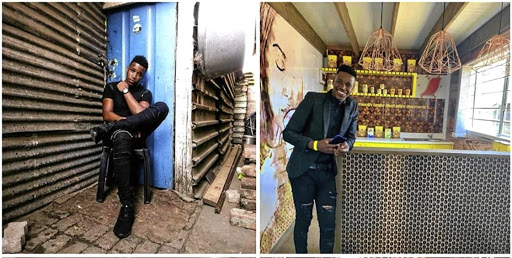 Self-taught "coffee artist" Ennock Mlangeni has realised his dream of opening an art studio in his community.

Known as the "coffee artist" since making a portrait of DJ Black Coffee using Ricoffy granules, Mlangeni of Zamdela in Sasolburg, Free State, said his dream was born in 2016.

"After realising the challenges of substance abuse, crime and unemployment faced by the youth, I decided to make a difference in the lives of the youth of Zamdela so that they can learn art and develop craft work," he said.

Now Mlangeni aims to offer young people free art classes at The Shack Art Studios, which he launched on Tuesday in Sasolburg.

The studio is a 12m-long metal container and has four sections that operate as a coffee shop, gallery, classrooms and his personal studio.

"I decided to go with the shack theme for the studio and using containers [because] I started drawing in a shack behind my home," he said.

"That's where all the talent was brewed."

He said his studio was sponsored by food and beverages company Nestlé, which came on board when he sold it the idea of the project.

"With The Shack Art Studios born, the initial goal is to open an art academy and make sure it spreads to other areas nationwide," he said.

The famous self-taught coffee artist Ennock Mlangeni has realised his dream of opening an art studio for his community.
News
2 years ago

Mlangeni said the youth will get free classes and materials.

He sells his sketches for up to R15,000, depending on the size of the portrait.

"Style is unique and I aim my art at people who purchase investment art," he said.

His passion for art started in Grade 4, leading him to win the Techno X Art Competition for three years in a row from 2011 to 2013.

"After Grade 12, I could not further my studies [due to a lack of funds]. I polished my art skills further and made it my career," he told Sowetan.

He said his work got noticed by marketing himself on social media, where he brands himself as Ennock-M Art.

He said his art is inspired by strong women like his grandmother, Esther Thokwane, who raised him after his parents died when he was just seven years old.

Portraits of newsmakers put artist on the map

We need more funds for R&D to compete globally – Pandor

The Department of Science and Technology’s budget is too small to build the economy and allow South Africa to compete on the global stage‚ Parliament ...
News
6 years ago

THE government's drive to revive economically depressed areas has received a shot in the arm following a decision by Nestlé SA to expand its ...
Business
9 years ago
Next Article