I can't be a hit when I hit the dance floor 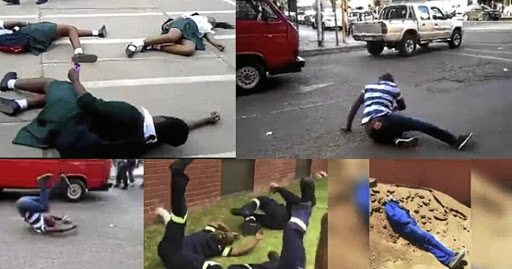 The fainting craze with King Monada's hit single Idibala may have come to the writer's rescue when it comes to making moves to music.
Image: Screengrabs

I can't dance to save my life. It took many years before I finally admitted I don't have the requisite skills to hit the dance floor.

Despite possessing a keen ear for music, I lack the fluidity and finesse to relax and sway rhythmically. I was first warned at boarding school to stop embarrassing myself. It was on a Saturday night when curfew was extended to midnight and a DJ would be invited.

Black Box's song Get Down was in vogue when I decided I'd show some deft moves, in a forlorn attempt to impress the girls.

Unfortunately, I crouched in a manner that concaved my back and alerted the spectators to possible spinal injury. They dragged me kicking and screaming from the dance floor.

Perhaps this was the reason I settled on hitting the books even though the highest grades seldom land you the crush of your life.

I could not even pull off the Madiba shuffle since I could not align my shoulders in proportion to my body.

Deep House came to my rescue because it meant I could enjoy the music by tapping the table and harassing other patrons by anticipating a loop. This means ensuring that anyone within hearing distance in the club knows that you know the song and they do not.

Every year‚ just before the festive season‚ South Africans come up with a dance challenge.
Shwashwi
3 years ago

I was rudely admonished by my own daughter a couple of years ago when the mood grabbed me and I stood up in a moment of madness and gave dancing a shot.

"Mavusana, my father, just give up," she said with a pained expression.

Of course this did not stop me from laughing at British prime minister Theresa May and her Maybot manoeuvres when she visited Mzansi recently.

The PM became an unlikely social media star when she got in the groove when she was welcomed by dancing school children. She was roasted for her rigid moves.

The Daily Telegraph described her dancing performance thus: "It was the exact moment where she loses the will to live . looked like a possessed shop mannequin being tasered."

Professional dancer James Jordan told the Sun: "You have to praise Theresa for trying. I'll give her two out of ten for effort - one point for each leg." Ouch!

Since December is my birthday month and the time to be merry, I believe this year it's going to be different. The chances of me letting loose increased exponentially since Mzansi was caught in the idibala craze.

Bolobedu dance superstar King Monada may have come to my rescue with his latest hit, Malwedhe, that has inspired a fainting craze.

However, there have been unpalatable reports of people "fainting" in risky circumstances such as when they are behind the wheel. Some videos have also dissuaded me from attempting the stunt of "fainting" on the hard ground so I believe it is best to give this one a miss.

I just hope a maskandi track will not steal Monada's thunder like Van Damme did to his Moreki hit song two Decembers ago. Let's enjoy responsibly.

Malwedhe up for song of the year