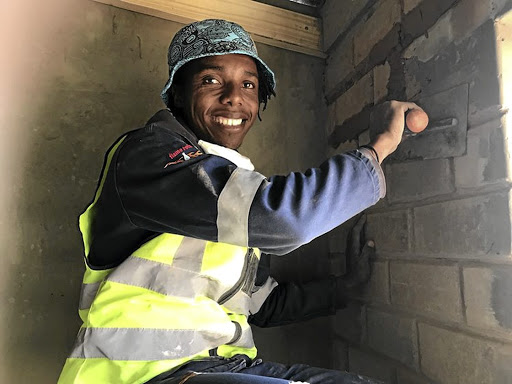 Nhlanhla Ndlovu did a brick-laying course and improved his family home.

Social entrepreneur and innovator Nhlanhla Ndlovu's entity Hustlenomics has embarked on a drive to end the backroom steel-sheet shack structures in formal townships and informal settlements.

Growing up in a corrugated iron shack himself, at the back of his home in Mofolo, Soweto, Ndlovu says the idea of replacing shacks with brick structures comes from his personal experience.

"It was in the early 2000s when me and my siblings found ourselves staying in backroom shacks. Our parents could not afford to build formal structure backrooms," recalls Ndlovu.

"The living conditions in a shack were bad when it rained or cold in the winter months with the wind blowing. Nobody in the family qualified for a bank loan or credit to build proper brick rooms for us.

"In 2002-03 I went for a brick- laying course. I was forced to drop out of school in matric to work at a tombstone manufacturing plant in Soweto. With the meagre salary I earned, I bought bricks to start building rooms at home using my brick-laying skills. Interestingly, I got help from friends, who knew nothing about brick-laying."

It took Ndlovu, 35, four years to build the rooms, with electrician friends lending a hand with the wiring. The entrepreneur saw a business opportunity. But he faced stiff competition from other builders. Ndlovu says a three-room structure cost about R12,000 to R15,000 in the mid-2000s, so it made business sense to lower his asking price to stave off the competition.

Mahlatji powers youth with Solar Lab In A Bag

In 2015, he decided to purchase a conventional brick-making machine and was introduced to the low-cost method of making interlocking bricks from construction rubble. "We could have gone the route of purchasing the bricks but I wanted to manufacture them myself so as to cut down on costs and transportation." Ndlovu now uses a much larger capacity brick-making machine on site.

"The new structures are built at no cost to the owners; they pay back with rental money they get from tenants staying at the completed structures. After a period of 54 months, full ownership of the structure is handed over to the land owner," says Ndlovu.

"The first 18 months of the contract is to recoup the building costs and the next 36 months our profit. We are mostly assisting those who cannot access home loan financing or bonds. "

Ndlovu has two law firms that help draw up contracts between Hustlenomics (him) and the home owner, the second with the tenant, and the third with his workers, who are employed on a part-time basis.

Ndlovu also prides himself on creating opportunities for township women and youth.

"As we grow, I want to employ more people and build up to three new houses a month as a township hustler," he says.