Entrepreneurs get their eye in the sky 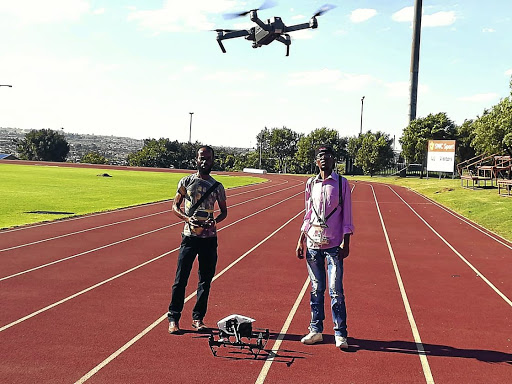 It took entrepreneur Kgolane Moruthane having a working stint in Qatar to open him up to the wide world of commercial drones and their limitless usage.

Moruthane, the founder and owner of Flight Mode Productions, established his enterprise in 2017 with partner Kabelo Afrika. Their specialist field is to offer aerial footage and analytical services by capturing any moment from the sky.

Through the use of commercial drones, the business's core function is to capture images - both still and video in the outdoors - be it agricultural landscape or public events.

"I went to work in Qatar doing logistics for one of the biggest firms in the culinary industry, working as a coordinator. I was exposed to a lot of technology and I witnessed how commercial drones are used in different industries," says Moruthane.

"As it is a hot and arid country, drones are used a lot in agriculture and farming to monitor crops and in irrigation. I thought I was bringing a similar service to South Africa and would be the first.

"To my surprise, I found out that the industry does exist in South Africa."

Moruthane, 36, and Afrika, 31, were not deterred as they were determined to carve a niche for themselves and offer a service like no other because there was very little in the form of agriculture technology in the country.

Flight Mode Productions purchased its first small and compact drone at a cost of R35,000.

It is equipped with a 4k video resolution, takes 30 frames per second and stays for 30 minutes in the air.

Moruthane says it was financed by their families who were keen to invest in the start-up.

Flight Mode Productions has since acquired a second commercial drone that is more advanced compared to the first machine.

The duo has pilot licences as there are stringent rules and regulations they should adhere to when flying drones.

"We have to efficiently communicate with other aircrafts in space on radio telephony. The drone must fly 30m away from people, an airport or radio or TV station. We also have to observe no-fly zones."

So who are Flight Mode Productions' clients?.

Moruthane says their primary market are farmers. "This service is of utmost need to the farmers as we help them make informed decisions because drones reach areas where farmers cannot go.

"They get information on types of soil, soil acidity, moisture of the land, water and hydro availability such as at nearby rivers and lakes and the pesticide treatment of the farmland."

Afrika says they are also big in film and video-making as well as events.

"We encounter a lot of red tape in the industry in as far as how far we can go in using drones. Besides a pilot licence, we are working on acquiring an operators' licence. At the moment, we are flying under umbrella body licences."

Moruthane, who has worked in the information technology sector is an SAB KickStart Boost finalist and is working on partnering with SAB to help achieve its 2025 sustainability goals through smart technology.

"I'm working on opening up new markets like partnering with SA Breweries for an affordable agri-tech programme for emerging farmers. "We are looking at connecting experts with farmers who are looking to increase their crop yields."

He currently employs two people and plans to subcontract up to 18 pilots by year-end.