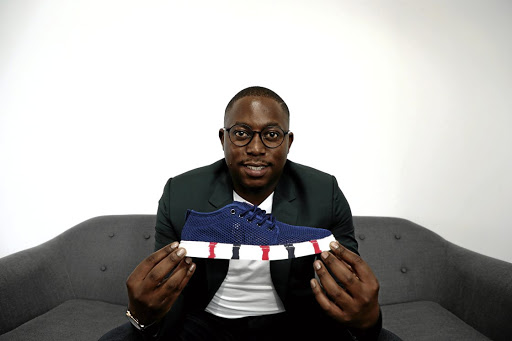 Theo Baloyi of Alexandra in Joburg is the owner of sneaker brand Bathu.
Image: Sandile Ndlovu

A humbling acknowledgement for Baloyi, 29, was confirmed at the annual South African Premier Business Awards last month. As the owner of a three-year-old business that started from a backroom in Alexandra, northern Joburg, he said he was beyond humbled.

"It is humbling and a good pat on the back to keep going. This is for the team who work with us," he said.

Bathu was founded in 2015 with the aim to tell a proudly untold SA township story to the world.

An accountant by profession, who had a plum stint for PwC in Dubai, earning a decent salary, he could have easily lived the Instagram life.

He told Sunday World that he had been bored of wearing fancy suits, ties and boardrooms - he preferred the hustle and grind of business.

"I was in the corporate [world] for a while, working a 9 to 5 job but I got bored of the numbers and the international financial reporting standards and auditing," he said.

Today he wears a white T-shirt and jeans accompanied by his own sneakers, that are 100% locally produced, with mesh material from Lesotho and manufactured in Durban.

The flagship design is the Mesh edition sneaker inspired by the happy socks trend in 2015, he said.

Siyanda Luthuli's not happy to just go with the flow

"Since there were happy socks, why not come up with a happy shoe that shows off the socks and blows air into your feet. The only sneaker that breathes," he said.

He said the mesh material used is normally a component of a shoe and not the whole shoe. He started off with a range of four colours and now has 11 colours, making a killing turnover of R20.2m for the 2018/2019 financial year.

"We are looking at tripling it in the next couple of years."

Baloyi employes 25 people, mostly from Alexandra, and has since opened three stores - in Newtown, Pretoria and Port Elizabeth.

Fresh from a sneaker conference in Vietnam, he told Sunday World he used to buy himself a lot of sneakers, so why not make his own?

"Actually, I worked hard on the research and development, quality testing, quality control and quality assurance.

"That process took about 18 months, including sourcing and building relationships with sources and stakeholders before we could get the shoe in hand." He said he made 21 samples and was declined 13 times before his Bathu was approved, after initial doubts about the mesh.