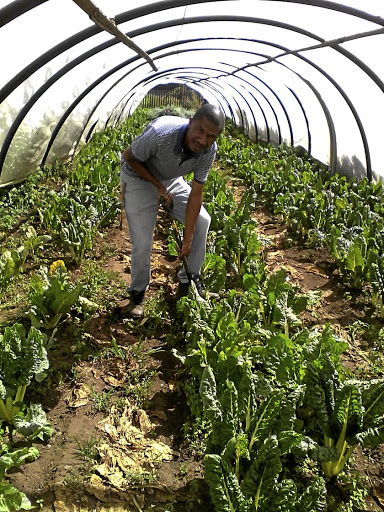 Agriculture entrepreneur Nelson Tsepa is the founder of the Dihoai Co-operative in Westbury, west of Joburg.
Image: Supplied

Tsepa grew up in Lesotho with an uncle who is a qualified agriculture inspector. His uncle had a big yard where he used to plant vegetables and Tsepa got involved in it.

"Even at school we had agriculture as a subject so I took that also in high school. Unfortunately, when I was in matric my uncle passed away so I lost the mentorship in the agriculture field," he said.

"I got influenced by my peers and did other things and that's where I lost touch with it until years ago when my love for farming was revived.

"What brought me back was that I was in marketing and sales and the company that I used to work at had retrenchments and there was nothing I could do. I was unemployed and frustrated and my brother-in-law and sister sat down and we spoke about what we could do. We discussed bringing vegetable gardens to schools in our community, so we went around the schools in the community but they said no.

"We then came to the Westbury Youth Centre and found people who were like us and wanted to make the garden work. The moment I stepped into this garden, I felt something like a rebirth. I felt so much peace and knew that this has to be more than just a garden. This was about two to three years ago," he said.

Tsepa, 40, has since clinched a partnership with the youth centre to mentor youngsters interested in agriculture.

He said that it was tough getting finance to start the business but they've been networking and formed other partnerships with entities such as the City of Joburg's farmers forum. The department of social development also purchases their produce to distribute to its beneficiaries such as clinics.

Andile Mnisi is focused on healing the environment

Tsepa has also secured a five-year mentorship with US organisation United Way, where he is coached on the technical and commercial aspects of farming.

Dihoai is the Sotho word for farmers.

"We started with the commercial side where we sold vegetables. We still do but we wanted more for the company so we decided to do research on how we could help the community and we found that the average age of a farmer in South Africa is 63 years. We thought, 'what if we were co-ordinators who brought the youth into the industry?'" Tsepa said.

Tsepa is currently looking for a place where they could train their students and teach them the basics of agriculture and is looking forward to raising enough funds to register with Agri-Seta and be certificated to teach in the field.

"You cannot love something that you don't know so that's why we want to introduce it to the youth," he said.

Tsepa said that in 2016, one of the matriculants from Westbury High, Lucia Molefe, took an interest in the garden and is now taking agricultural studies at Stellenbosch. This encouraged Tsepa to continue with the programme.

"The idea is to have a generation that knows where their foods are coming from and to teach them the importance of eating organic food, even if we don't plant the foods ourselves but just know where to get them," Tsepa said.