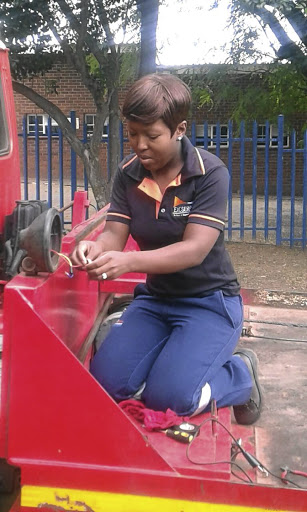 Gabisile Mashilwana is hands-on in her business.

The power of small enterprises was demonstrated when a young entrepreneur entered the auto electrical solutions industry by a stroke of luck and today she is excelling in the field.

The auto electrical solutions business specialises in the repair of starters and alternators; vehicle and machine wiring; winding of stators, rotors and armatures; vehicle diagnosis; and the supply of auto electrical parts and spares.

Mashilwana, 30, established and registered the business in 2015 and began operating the following year.

"It was not something I wanted to do initially. I wanted to do electrical engineering after completing my matric. It was after I was enlisted to work as an apprentice at a local auto electrical business that my interest was ignited," explained Mashilwana.

"The management at my new job promised that I would be allowed to do practical work while studying the theory part but that was not to be. I resigned in 2010 to go and study what I was passionate about - electrical engineering - at the Gert Sibanda TVET College.

"After qualifying I was jobless, then I saw an advert for auto electricians at Caelex Chris Auto Electrical in Pretoria. I applied and was accepted. Out of the six candidates, three of us were employed."

Being far from home, the mother of two said she could not cope with being away from husband Humphrey Ndlovu, the kids and the rest of her family.

"The rented flat was also expensive as I was not earning much. As a Christian I persevered while I was networking in my parish in search of a job nearer home."

Innovative techpreneur Khomotso Malakalaka has launched an online grocery shopping and delivery app, The GoodGrocer, that is set to take retail ...
Business
3 years ago

She then resigned to form a partnership with another passionate auto electrician, Biona Mutamira, using the backyard room of her home. Mashilwana said she owes her success to Mutamira because the small business flourished after she roped him in as a partner.

Mashilwana said because of her faith as she is a God fearing person, a couple in her parish motivated her and her husband not to give up on their dream of one day owning a successful business.

"My mentor Hilton Mukuwiri played a very important role. He once offered me a job but I deferred the idea of joining him because I was determined to have a business I call my own. I told him I would join him only if I don't succeed in my endeavours."

Mashilwana got a R100000 interest-free loan as start-up Capital. With the cash injection she bought the auto electrical equipment they needed.

The Small Enterprise Development Agency assisted the start-up with setting up a website and empowered them with business skills such as accounting and finance.

The start-up currently employs three people and plans to employ up to nine by 2023. Her business goals are to employ a full-time, qualified auto electrician because presently she is doing the bulk of the work herself. She also plans to introduce women auto electricians into the business.

In the long term she plans to gain recognition as the leading auto electrical solutions company in the Evander region and move to her own premises as she is leasing her workshop at a local industrial area.