Group says its grievances are meant for Fifa 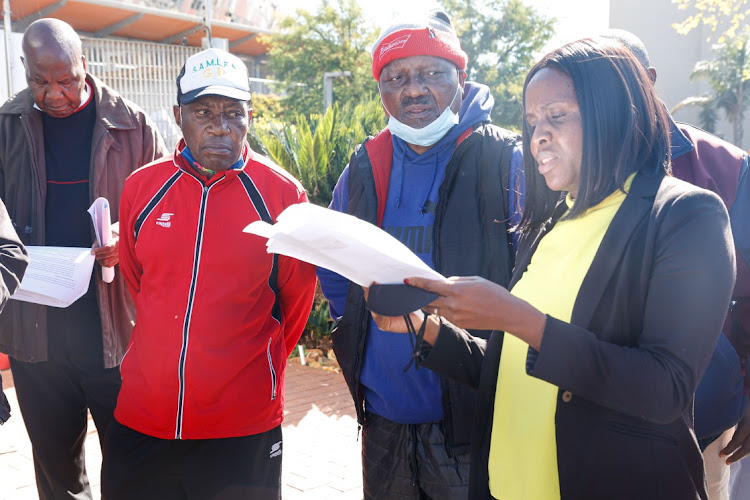 Former Bafana Bafana coach Shakes Mashaba yesterday led a group picked by Gauteng Masters and Legends, an organisation of retired footballers, to Safa House where they delivered a memorandum of grievances addressed to Fifa.

About 1,200 people joined the largely peaceful protest that was observed by a group of police officers.

Mashaba, the chair of the Gauteng Masters and Legends,  walked into his former employer's offices flanked by his executives, demanding that their memorandum be received by a Fifa representative.

At the end Mashaba spoke to David Fani from the Fifa development structures on the phone.

In the absence of Fani at Safa House, COO Lydia Monyepao accepted the memo. She read its contents with the nine grievances, including matters of SA Masters and Legends Football Association (SAMLFA), the Siyaya broadcast contract, latest amendments to the Safa constitution and what they described as a bloated executive.

The group also demanded that former players be involved in the Safa structures. They  also queried the R20.8m reportedly paid to Safa national executive committee members.

"I came here to support their [ex-players'] call for a more structured recognition by the association. I think they have the right to respond to this notion that they must serve 10 years first in the LFA to be recognised as key role players in the game," Mumble said.

"It's about time we recognise them, not necessarily to become NEC members but there are committees where these guys can positively contribute to the growth of the game."

'Only a matter of time before Downs conquer CAF again'

Mamelodi Sundowns could lift their second trophy this week, and third of the season, should they overcome Marumo Gallants in tomorrow’s Nedbank Cup ...
Sport
2 months ago

TS Galaxy midfielder Aubaas Bathusi has opened up about how coach Dan Malesela masterminded their famous victory in the Nedbank Cup final against ...
Sport
2 months ago

Pirates go for broke in push for Champions League qualification

Orlando Pirates will have to achieve something they failed to do in league matches in the entire season by winning three successive games to finish ...
Sport
2 months ago

Cape Town All Stars and the University of Pretoria will kick off the PSL playoffs on Sunday at the Athlone Stadium (3pm), and both understand the ...
Sport
2 months ago
Next Article