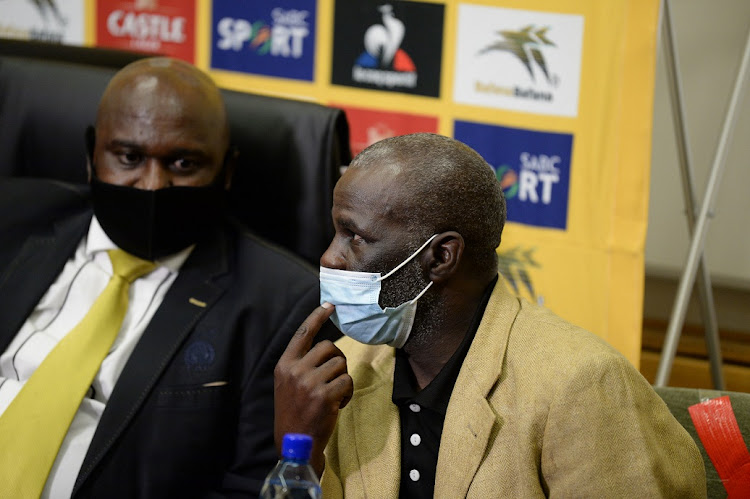 The skirmishes that have been a feature of the upcoming SA Football Association (Safa) presidential elections have even spilt over to the SA football legends as former Bafana Bafana teammates disagree on key issues.

Ex-Bafana stalwart David Nyathi, now secretary-general of the SA Masters and Legends Football Association (SAMLFA), has taken a veiled swipe at former players Doctor Khumalo and Lucas Radebe after they recently criticised Safa over the worrisome state of SA football.

A march by a section of disgruntled SAMLFA members to protest at the Safa headquarters was also organised for Thursday. TimesLIVE understands the march may be called off.

Nyathi said that former players should not allow themselves to be used and to make ill-informed public statements.

Khumalo, Radebe and Nyathi are Bafana icons and were teammates in the 1996 team that won the Africa Cup of Nations on home soil.

Khumalo spoke at the recent non-starter election manifesto launch for Safa vice-president Ria Ledwaba and complained that legends such as Radebe should be playing bigger role in reviving SA football instead of being sidelined by Safa. Radebe has hinted that he is interested in one day becoming the head of Safa because of his vast experience of the game.

Khumalo has thrown his weight behind Ledwaba’s campaign, where she plans to stand against incumbent Danny Jordaan in the June 25 elective congress.

“Let us be vigilant and be on guard against those who want to divide us and use us for their gain and let us stop making ill-informed utterances to the public,” Nyathi said.

“We need to educate ourselves with Safa policies, its code of ethics and constitution; otherwise we will continue to be divided and to be used by those who have ulterior motives.

“Former players and footballers must be unified to formulate a strong representative voice for all our members.

“I am aware the Safa elective congress will take place next month and there are campaigns — this is a democratic process governed by the Safa constitution where all affiliated members of Safa have the Right to participate and contest for positions.”

On the proposed march to Safa House, Nyathi said: “We have been made aware that there is a planned march to Safa House on Thursday, by people who claim that they are SAMLFA members. These people are neither authorised by SAMLFA nor represent the interest of the organisation.

“We, SAMLFA, have no such activity in our upcoming programmes, in all our structures. Therefore, we would like to completely dissociate SAMLFA and its members from this activity and those who participate in it.”

The build-up to Safa’s elective congress has been marked by mudslinging and accusations including that constitutional changes were made at a March 26 Safa congress allegedly aimed at entrenching the current national executive and Jordaan.

Ledwaba sent a letter of complaint to Fifa based on those allegations.

Ledwaba was prevented from addressing her campaign launch after a letter of warning from Safa that she could be expelled from the race if she canvassed before she was cleared as a candidate by the election’s governance committee.