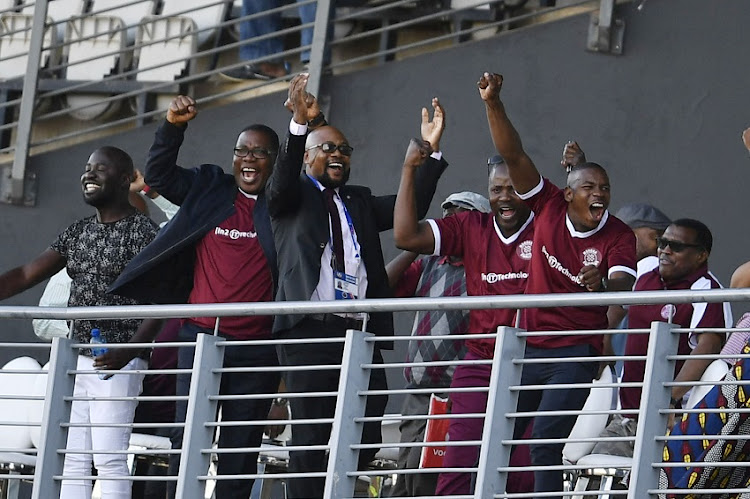 Swallows chairperson David Mogashoa has made it clear they aim to keep the influential squad members who helped the Soweto club engineer a sensational return to the Premiership.

Having been demoted from the elite league in 2014/15 season, Swallows confirmed their return to the big league via  winning the second-tier championship at the weekend.

Swallows clinched automatic promotion by virtue of a better goal difference as they were level on 57 points with Ajax, who’d to settle for position two and will compete in the play-offs.

The triumphant Swallows team is made up of tried and tested troops who were discarded by Premiership clubs in the past, the likes of Vuyo Mere, Lebohang Mokoena, goalkeeper Virgil Vries and striker Ace Bhengu among many others.

The Dube Birds complimented experience with some promising stars such as Given Thibedi, Itumeleng Shopane, Sizwe Twala and Ayanda Rorwana (all on loan from Kaizer Chiefs) and the eventual club’s leading-scorer Kagiso Malinga (12 goals), who was loaned from SuperSport United.

Swallows FC owner-chairman David Mogashoa has given a vote of confidence to coach Brandon Truter and declared that the championship-winning mentor ...
Sport
1 year ago

“We want to keep all the players who helped us reach this level,’’ Mogashoa told Sowetan yesterday. The Dube Birds boss is also positive they can strike a deal with the clubs who lent them players to keep them, highlighting he predicts that Chiefs would be open to let them retain some of the players.

“We are going to talk to the clubs first, but if they do need their players back we still have time to fill those positions. However, I am confident they will allow the players to remain with us. I am very comfortable with Chiefs that the players won’t be going back,’’ stated Mogashoa.

After the departure of George Maluleka to Mamelodi Sundowns, many tipped Thibedi to replace him at Naturena, meaning it could be unlikely  he remains with Swallows, especially if Chiefs lose the Court of Arbitration for Sport (CAS) appeal that will be heard on September 9.

Swallows are expected to register Makhulong Stadium in Tembisa as their secondary home ground, with Dobsonville Stadium in Soweto to stay as their main home venue.