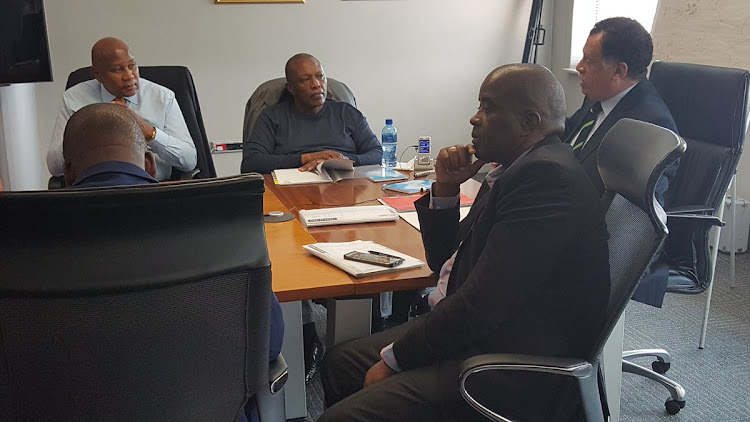 SA Football Association chief medical officer Dr Thulani Ngwenya has explained how Safa and the National Soccer League (NSL) put aside their differences to formulate a plan for a safe return to training that he said Fifa has called “one of the best it has received”.

As the coronavirus broke out in South Africa and numbers grew in March‚ resulting in the Premier Soccer League (PSL‚ the trading name of the NSL) suspending football and the national lockdown‚ the NSL and Safa were initially at odds on when and how football could resume.

Safa was adamant that a return could not be made before level one of the national lockdown. The PSL‚ fearing a financial catastrophe‚ was determined it should happen sooner.

Sports Minister Nathi Mthethwa asked the PSL and Safa to speak with one voice‚ and Ngwenya was part of the joint liaison committee (JLC) task team between the two that achieved that task.

On Thursday the sports ministry passed‚ and gave a glowing report-back to‚ football’s plan for a return to training‚ as allowed for contact sports under level three of the lockdown. Ngwenya indicated the return to play plan in a biologically safe environment has also been passed‚ pending finding a venue and government approval of the timing.

“There was an issue whereby we had Safa and the NSL having a different view on the resumption of football. And the minister said‚ ‘No‚ you need to talk in one voice‚ go and find each other and have a position of football’‚” Ngwenya told an online press conference of the SA Football Journalists Association (Safja).

“So the JLC was called‚ and I was asked to make a presentation. And I must be up-front and make it very clear – it was a position that was I saying that the projection is that we are going to reach our Covid-19 peak in August.

“And we are seeing that at the moment‚ with the growth of cases. So my presentation‚ in summary‚ was that football should resume at level one when it is safe to do so.

“The NSL came with a different view. They agreed that‚ ‘We need to put the health of the players first and that is paramount’.

“They said‚ in the view that we have can we look at the issue of livelihoods of players‚ and the issue of contracts.

“Because I was purely looking at it from the medical perspective. Remember‚ I’m a doctor.

“The NSL had a document already‚ and they also presented that at the JLC. However‚ from the medical perspective I said‚ ‘There are some gaps in that document. Can we rather look at closing those gaps so that we’ll avoid a situation where we’ll have an outbreak that can make us look very bad?’

“The JLC then said‚ ‘OK‚ because there are contrasting ideas‚ let us form a task team that will have three members from the NSL and three from Safa to make sure we have a comprehensive document without gaps‚ that minimises the risk of infections in the games’.

“The JLC chair‚ Poobie Govindasamy‚ said to me and Dr Lervasen Pillay‚ the NSL chief medical officer‚ ‘Go and consult your colleagues’.

“I then called a meeting of senior club doctors‚ with Dr Pillay‚ and the chief medical officer of Sascoc [The SA Olympic committee]‚ the doctors in rugby‚ people who deal with public and occupational health‚ and cardiologists in consultation.

“We managed to put together a very comprehensive document that minimises the risk.

“We sent that document through to Fifa too. And Fifa are very pleased. They are saying the document is actually one of the best they have received thus far.

“That document was adopted by the JLC‚ and the Safa [acting] CEO [Tebogo Motlanthe] sent that document to the government.”

The JLC is the bridging committee between Safa and the PSL.