Middendorp: Difficult for Chiefs ‘to know what AmaZulu are doing’ 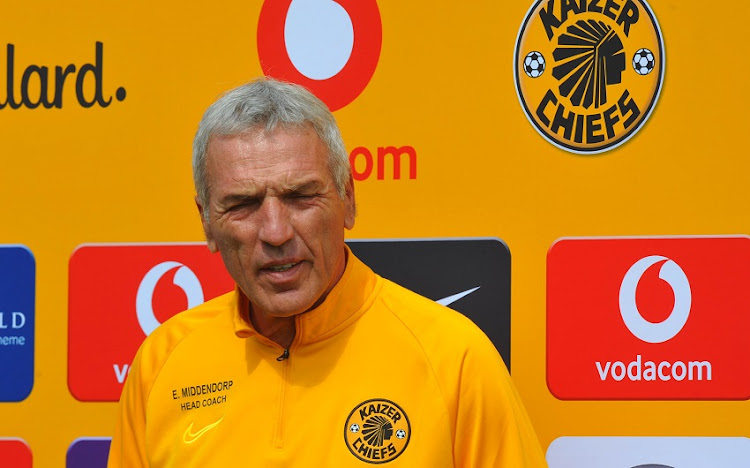 Kaizer Chiefs coach Ernst Middendorp‚ known for his research in stadiums on opponents‚ says with AmaZulu under a new coach Amakhosi have concentrated more on their own gameplan for Saturday night’s Absa Premiership clash.

Middendorp admitted it has been difficult to plan for last-placed Durban team AmaZulu’s meeting against the league leaders at FNB Stadium (kickoff 8.15 pm) given Usuthu coach Jozef Vukusic’s abrupt “special leave” this week.

The Slovakian has been replaced by his assistant‚ Ayanda Dlamini‚ as caretaker-coach.

Chiefs’ coach said this has been compounded by four AmaZulu players being recalled this week from a suspension imposed midway through February.

“Ironically when we played them in September it was the same situation – a new coach [as Vukusic replaced Cavin Johnson] came in‚ I think it was his first game‚” Middendorp said of a 2-0 win to Chiefs in Durban marked by dubious match officiating in his team’s favour.

“Now again a new technical team is responsible for putting something together. It makes it a bit difficult for us in terms of what AmaZulu are doing.

“They have these four suspended players back into selection for the top XI.

“That’s one part of the preparation. But for every game then the second part is important.

“And we have put a bit more effort in to say‚ OK‚ look into our side. How have we done it in the first game‚ to win that game?

“And how will we do it – are we going more left‚ more right‚ more central? Are we skipping the midfield line‚ are we pressing high‚ or in zone two?

“This is where we to decide on which players will be in our first XI.

“So we have put more effort on our side [of planning].”

Usuthu this week reportedly recalled four of those players – all except Majoro‚ with the striker still training alone – though Morton apparently did not report back.

Chiefs are coming off perhaps their biggest win of the season‚ 1-0 against Orlando Pirates at FNB on Saturday‚ which saw their lead extended to seven points over Mamelodi Sundowns.

With so much in flux at AmaZulu‚ Chiefs might be expected to roll over the Durbanites.

But teams at the bottom of the table can be motivated by desperation‚ and a coaching change can also result in initial positive results.

Chiefs will do well to be wary of an Usuthu backlash at FNB in a potentially thorny encounter.