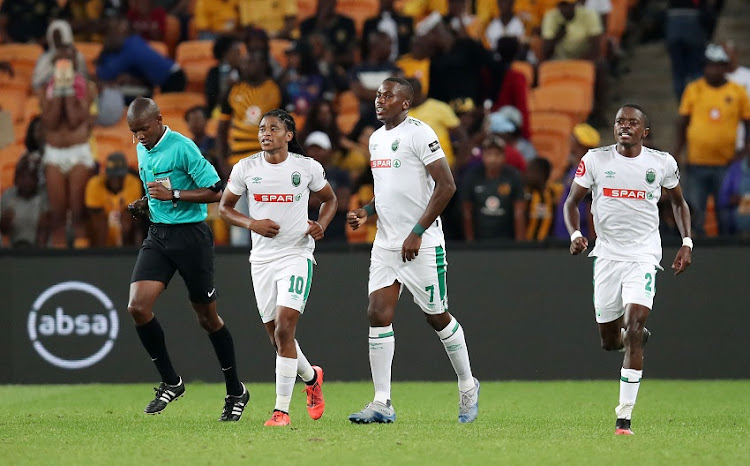 Bonginkosi Ntuli of AmaZulu (7) celebrates goal with teammates during the Absa Premiership 2019/20 match between Kaizer Chiefs and AmaZulu at the FNB Stadium Johannesburg on the 07 March 2020.
Image: ©Muzi Ntombela/BackpagePix

Kaizer Chiefs seem intent on matching each step forward with two sideways in their Absa Premiership title chase, the leaders being shocked 1-0 by last-placed AmaZulu at home at FNB Stadium on Saturday night.

Chiefs desperately want to win the 2019-20 Premiership, but sometimes their attempt to grind results against even lowly opposition can seem counterproductive.

This was just AmaZulu’s third win against Chiefs in the PSL era, and first since 2007, in Amakhosi coach Ernst Middendorp’s last match before being fired in his first stint 13 years ago.

A pulsating 1-0 Soweto derby victory against Orlando Pirates – though one where Chiefs rode their luck – here last Saturday confounded predictions of Chiefs’ title chase cracking. This match was an opportunity to ram home the advantage against a team whose head coach, Jozef Vukusic, was put on special leave this week.

There always seemed a danger Chiefs could struggle to match the intensity they displayed in the derby in a come-down in front of a far smaller crowd against the struggling, but also desperate, team from Durban.

That threat was not helped by Middendorp going back to the ordinary in his ideas in midfield and attack.

Kearyn Baccus, George Maluleka, Lebogang Manyama and Anthony Akumu – in for injured Willard Katsande – are all central midfielders to some degree now.

Such a static middle four behind big Leonardo Castro and Samir Nurkovic might be effective blocking a team throwing the sink at Chiefs, as Pirates did. Against the bottom-placed side it seemed a tooth-grindingly conservative approach.

Chiefs manufactured one clear chance in the first half, though a good one. Manyama, with an option to release Reeve Frosler on the right, looked up for a pass across the area to Leonard Castro free on the left, who awkwardly placed wide.

Emboldened by static Chiefs, Usuthu managed a goal. Talent Chawapiwa skilfully created space on the left and chipped across the box to find Ntuli free for a simple tap-in past Daniel Akpeyi.

Middendorp aimed to mix things up out wide from the break, introducing Khama Billiat and Bernard Parker for Akumu and Baccus, with Manyama going into the middle.

Chiefs had another clear chance, centreback Daniel Cardoso’s chip finding the run of Manyama, who skimmed his header.

Usuthu were dangerous prying for holes left by an Amakhosi pushing forward, as Sphesihle Maduna beat offside to shoot into the netting.