Sundowns knocked out of Champions League by Al Ahly 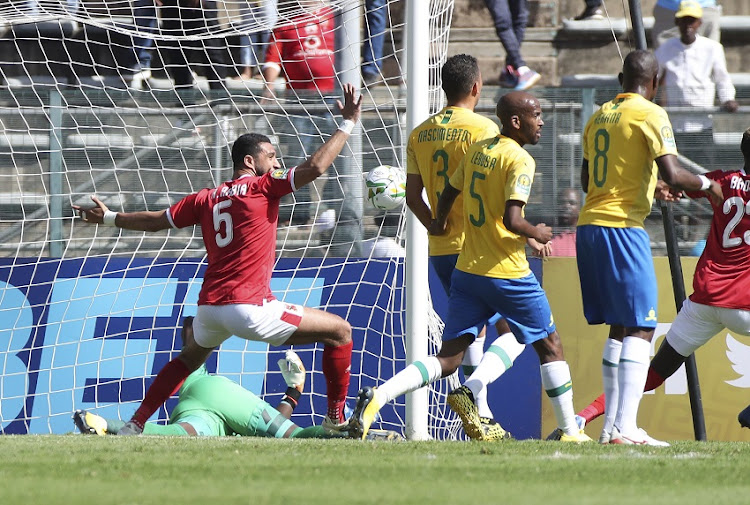 A 21st minute Lebohang Maboe’s own goal dealt a huge blow to Mamelodi Sundowns’ hopes of pulling what would have been a remarkable comeback against Egyptian giants Al Ahly in the Caf Champions League second leg quarterfinal match at a packed Lucas Moripe Stadium on Saturday.

Sundowns were eliminated 3-1 after failing to find ways to break down the wall that Ahly players formed around their goalkeeper Mohamed Elshewany immediately after sensing victory against a team that humiliated them 5-0 here in the same competition last year.

Sundowns needed to reverse a 2-0 deficit they suffered in the 1st leg tie in Cairo last week but after Maboe mistakenly deflected in Amhed Fathi’s low free kick from the left flank, it became even more difficult for Pitso Mosimane’s team to turn things around as they now needed four clear goals to qualify for a second successive semi-final in Africa’s premier club competition.

Mosimane’s team did look like they were capable of climbing this mountain when they found the equalizer through Gaston Sirino six minutes after the visitors had been gifted the lead.

But the eight-time African champions - the most successful club on the continent - used all the delaying tactics in the book to derail Sundowns and they were not helped by Gambian referee Bakary Gassama, who turned a blind eye to most of the visitors’ shenanigans.

Elshenawy was the master of stealing time whenever he had to take a goal kick or after making a simplest of saves and Gassama waited until the hour mark to put him on a straight and narrow line with a yellow card.

Even after this crushing loss Mosimane will still be proud of his charges who gave their all in this match playing against the most experienced team in this competition.

Since winning the trophy in 2016 Sundowns have always made it to the tough group stages (2017, quarterfinals; 2018, group stage; 2019, semi-finals), with Mosimane putting more emphasis on trying to earn Sundowns a second star on their shirt, which will be a first for South African club.

Mosimane always knew it was going to be a mammoth task to reverse the first leg result which came though the Tunisian international Ali Maaloul’s brace in Cairo.

Ahly came here with an outstanding record of defending their 1st leg leads. They have only given away a two goal advantage twice in African club competition in their decorated 112 year history.

It’s not all lost though for Sundowns as far as this season is concern. The Brazilians still have two domestic titles to add to the Telkom Knockout they won last year. Mosimane will want to chase runaway leaders Kaizer Chiefs in the Absa Premiership race right until the last round on May 9.

While it might be tougher to catch Chiefs, it is in the Nedbank Cup where Sundowns are a little in control of their destiny.

But a meeting against a highly-motivated Highlands Park at the Makhulong Stadium on Saturday may also be a daunting assignment for a team fresh from the Champions League exit.