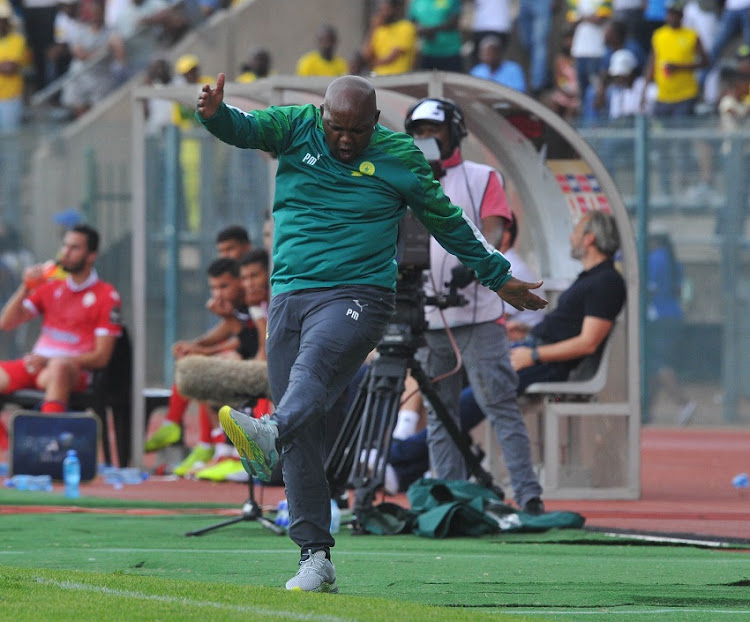 Pitso Mosimane has admitted that a repeat of last season’s 5-0 thumping of Al Ahly may be a bridge too far this year but this has not deterred the Mamelodi Sundowns coach from plotting a famous African Champions League comeback against the Egyptian giants at Lucas Moripe Stadium on Saturday.

The Brazilians stunned the Red Devils in the quarterfinals of the Champions League last year and the two adversaries resume their rivalry at the same stage of the competition on Saturday with the Egyptian holding a 2-0 advantage from the first leg in Cairo last week.

This means Sundowns have to score at least three unanswered goals to progress to the semifinals where they are likely to meet Morocco powerhouses Wydad‚ who are leading Étoile du Sahel 2-0 from the first leg.

“We have to be realistic‚ results like that come once in a while‚” Mosimane said on Thursday.

“Maybe we may never have a result like that in our lifetime but you will never know.

"Is it possible? Yes.

"It is not going to be easy but at the end of the day you wish for it to happen so that we can progress.”

Pitso Mosimane on their #CAFCL clash against Al Ahly. pic.twitter.com/bUw8wfaKDI

Mosimane said Sundowns would pursue an early goal in a bid to unsettle the visitors‚ the wily mentor also warned his players to exercise patience and caution.

“We know our approach is going to be to push forward and try to score as early as possible‚ but we must never be too desperate to score in the first ten minutes of the game‚" he said.

"If the opportunity arises we will take it.

"At the same time we will see what their approach is going to be (because) I don’t know if they are going to sit back and deny us space to operate.

"If they play an open game‚ maybe we can do something but we don’t know how they are going to approach the game.

“The biggest challenge for us will come if they do not allow us to play our normal game and they sit back and break down the game.

"They broke down all our attacks in Cairo and committed so many fouls‚ but do you want to comment about referees.

"The Champions League is tough because you have all the big boys and it shows on the field. We cherish the opportunity of being among the top eight teams on the continent.”

North Africans are known for their delaying tactics when they have an advantage but Mosimane said experience has taught him that they will not waste time if they concede an early goal.

“We cannot be complaining about delaying tactics in the Champions League on year six of playing in the competition‚ we must be ready for anything.

"You can’t be here and say that they are coming with delaying tactics.

"If they do it‚ they do it and it will be part of their plan but if you score there won’t be any delaying tactics.

"Delaying tactics also happen because of the scoreboard and the time left in the game.”