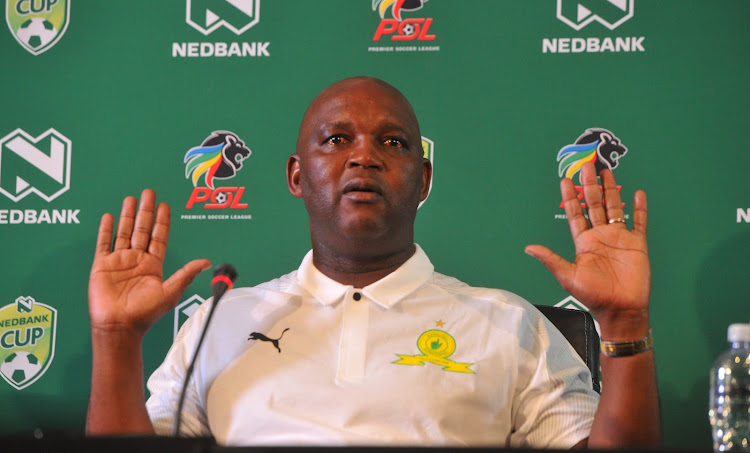 Outspoken Mamelodi Sundowns coach Pitso Mosimane has stepped up the psychological warfare and likened rivals Kaizer Chiefs to a student who only have to worry about three courses at tertiary.

Mosimane has waged a relentless verbal war against Premiership leaders Chiefs for months now and he said on Thursday if he were to compare the two sides‚ Sundowns would be a student doing ten courses while his bitter rivals would only be registered in three or four.

“They (Chiefs) have no excuse‚” said the fiery Mosimane.

“It’s like we are at school‚ I am doing ten modules and you are doing three or four.

"At the end of the year you must pass because you did less modules than me.

"And remember you have to pass and with distinctions because I am doing ten modules and the amount of time in studying is not the same.

"Guys‚ you have to pass and there is no excuse.

"The league is in their hands and they must win it‚ you can’t fail to do it.”

Chiefs lead the standings by nine points but they must negotiate past tricky fixtures against teams like Maritzburg United‚ Orlando Pirates‚ Bloemfontein Celtic‚ Sundowns and Bidvest Wits twice during the run-in.

Champions Sundowns have not given up hope of catching up with Chiefs and will be looking to continue the chase when they host Chippa United in a league match at Loftus on Saturday.

Mosimane‚ who last week said he will try by all means to defend their league title‚ said the league is firmly in the hands of a ‘rested and fresh’ Chiefs who did not play in the MTN8 or in Caf club competitions.

“Chiefs are not playing‚ they wait for you‚ they have seven to eight days of rest‚ I mean really‚" he said.

"They are fresh‚ it’s easy for them to deal with Maritzburg United at the weekend but let’s go to Caf and put more games.

“Wits put six games during the early stages of the Confederation Cup and they put six more during the group stages‚ that’s 12 more games to their schedule than their competitor who is sitting on top.

“We put 12 in the Champions League so far.

"We played in two MTN8 semi-finals‚ we went all the way in the Telkom Cup (and won it) and the competitor did not even do the MTN8.

"They are fresh‚ they are strong and they have to win the league.”

Kurt Abrahams is not a name known to many local football fans‚ but the Westerlo forward is closing in on the record of Percy Tau in Belgium last ...
Sport
1 year ago

Orlando Pirates coach Josef Zinnbauer and his striker Gabadinho Mhango were the undisputed stars of the show for the Absa Premiership for January, ...
Sport
1 year ago

Mystery has deepened over the status of Orlando Pirates assistant coach Rulani Mokwena after the club said they 'do not know' where he is or how long ...
Sport
1 year ago
Next Article