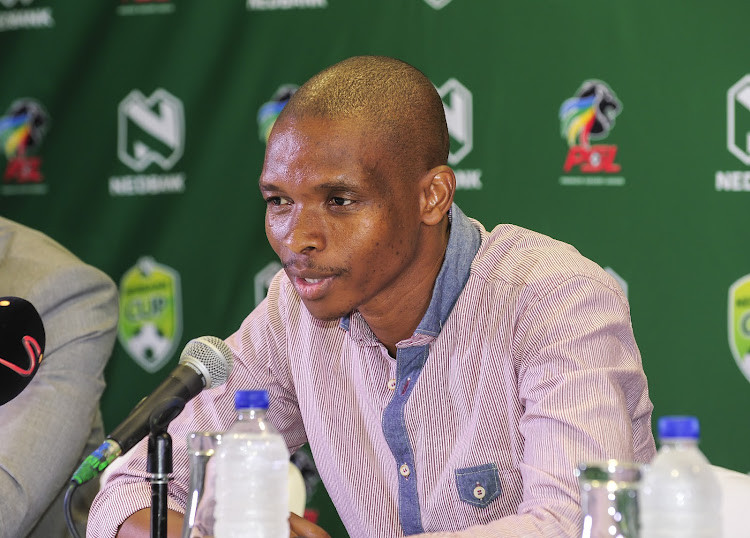 Phumlani Ndwandwe speaks during the Nedbank Cup press conference at the PSL Offices in Johannesburg on February 7 2020.
Image: Gerhard Duraan/BackpagePix

Happy Wanderers’ Phumlani Ndwandwe hopes to add his name to the list of successful owner/coaches after guiding his KwaZulu-Natal ABC Motsepe League side to the Last 16 of the Nedbank Cup on Tuesday.

An excellent free-kick from Mxolisi Mazibuko secured a 1-0 success over Cape Town side Zizwe United at the Athlone Stadium‚ setting up a home Last 16 clash with second-tier TS Sporting.

Ndwandwe joins the likes of Jomo Sono (Jomo Cosmos) and Nditsheni Nemasisi (JDR Stars) in filling both the owner and coach role of the team‚ and says the side have come far in a short space of time.

“I bought this team in LFA [Local Football Association] and we progressed to SAB Regional League and then the ABC Motsepe League‚” Ndwandwe says.

“Sixty percent of these guys were with me in the LFA‚ so they know what I expect from them.

“We invest a lot on keeping them fit‚ talking to them about not doing anything athletes should not do. Hence we are here.”

Zizwe had the better chances in the game‚ but Wanderers kept them at bay‚ and Ndwandwe admitted it was a battling win.

“It was a tough game‚ we played a very good team‚ they came at us hard in the first 15-20 minutes.

"We had to make sure we did not concede in that critical phase of the game‚ or the last five minutes in each half‚” he said.

“I told the boys I had done as much as I can in terms of preparations‚ it was now up to them.

“In terms of going through to the next round‚ what an excitement‚ I’m very happy for the boys.”

Ndwandwe admits they do not know too much about GladAfrica Championship side TS Sporting‚ but will focus on their own strengths.

"Underestimate us at your own peril" is the warning from Amavarara FC to fellow competitors in the Nedbank Cup.
Sport
2 years ago

It will be a case of seeking redemption when Polokwane City and Baroka face off in the Nedbank Cup last 32 Limpopo derby at Peter Mobaka Stadium ...
Sport
2 years ago
Next Article