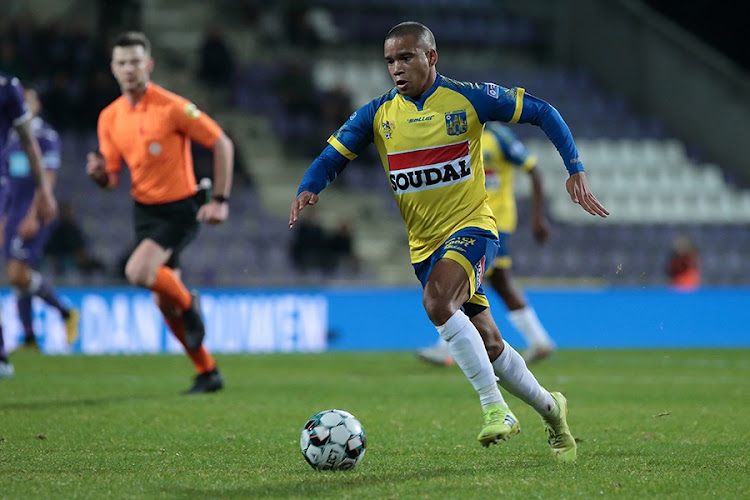 Kurt Abrahams in action for his Belgian side Westerlo on February 3 2020.
Image: KVC Westerlo/Facebook

Kurt Abrahams is not a name known to many local football fans‚ but the Westerlo forward is closing in on the record of Percy Tau in Belgium last season.

Abrahams netted his 10th goal of the season in the Belgian second-tier on Wednesday‚ an excellent return considering he is largely played as a winger and not an out-and-out forward.

That is just three shy of the 13 goals Tau scored for Royal Union St Gilloise in the same division last season‚ for which he was lavished with praise and won the Player of the Season prize.

Abrahams does not have Tau’s profile‚ but his achievements should not be disregarded.

Having never played in the Premier Soccer League‚ local fans have no exposure to the 23-year-old.

But he played in the top-flight at Benni McCarthy’s former club Sint Truiden‚ and since joining Westerlo at the start of the 2018/19 season‚ has been a revelation.

“I believe in myself‚ so I will just continue to enjoy every minute on the training pitch and on match day‚ always try to do the best for my team.

"If I do that‚ I know the rest will take care of itself based on my performances. I always play with maximum enthusiasm‚ that for me is very important.”

Abrahams can play either on the wing or as a central forward‚ suggesting his best qualities are his‚ “first touch and speed”.

Abrahams hails from Lavender Hill in Cape Town and was taken to Europe by Colin Gie after a number of local sides rejected him due to his small stature.

He made his debut in the Belgian top-flight at the age of 20‚ but has yet to feature for any of the junior national teams.

Westerlo are currently top of their second-tier division‚ and is joint top-scorer in the second half of the campaign.

Mystery has deepened over the status of Orlando Pirates assistant coach Rulani Mokwena after the club said they 'do not know' where he is or how long ...
Sport
1 year ago

Sukazi has faith in Ajao and Mtsweni
Sport
1 year ago

Former Orlando Pirates midfielder Joseph Makhanya believes Luvuyo Memela deserves as much praise for the team's revival in the league.
Sport
1 year ago
Next Article