Highlands Park out to turn tables on Chiefs 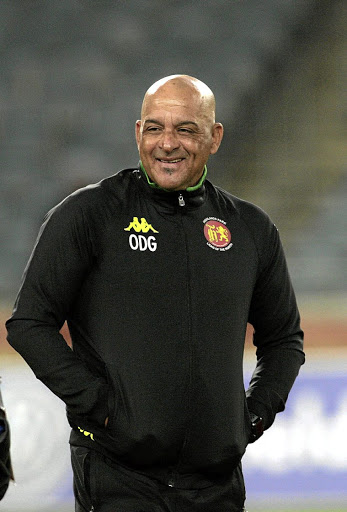 Highlands Park will be going into their Nedbank Cup last 16 match against Kaizer Chiefs later this month hoping it's a case of third time lucky.

The Lions of the North have already failed in two attempts to beat Amakhosi this season, losing 3-2 and 3-0.

Coach Owen da Gama is keeping his fingers crossed for a change of fortune for his troops against the Glamour Boys in a game where they will be hoping to avenge those defeats.

"You always want the smaller teams [in the Cup draw]. I think everybody was looking for smaller teams. Top teams wanted smaller clubs and got their wishes during the draw," Da Gama told Sowetan yesterday.

"The most important thing is, we played Chiefs twice and they have beaten us twice. We learned a lot from them and even now when we play them for the third time, we will learn and grow more as a team.

Bidvest Wits coach Gavin Hunt fears his thin squad could crash and burn as they chase glory on two fronts in the Absa Premiership and Nedbank Cup.
Sport
1 year ago

Da Gama has, however, warned that Chiefs will be facing a different Highlands side this time than they did in those previous two Absa Premiership fixtures.

"The first defeat was narrow; they scored a winner in the last minute. The second match, it was not a true reflection of the game. I think we had a lot of injuries and we had an unsettled team.

"But for now, we know what the draw is and we are totally focused on our league game against Bloemfontein Celtic on Saturday, and we will start thinking about Chiefs later."

Having reached the MTN8 final earlier in the season where they lost to SuperSport United, Da Gama believes that took its toll on his players, which resulted in a bad run.

"It [the MTN8] comes at a time where you are just starting [the season]. You play Chiefs and Pirates with Stellenbosch in six days. We felt it," Da Gama said.

Focus will switch to the Nedbank Cup over the next week as the 16 Premier League sides battle it out with eight each from the GladAfrica Championship ...
Sport
1 year ago
Next Article