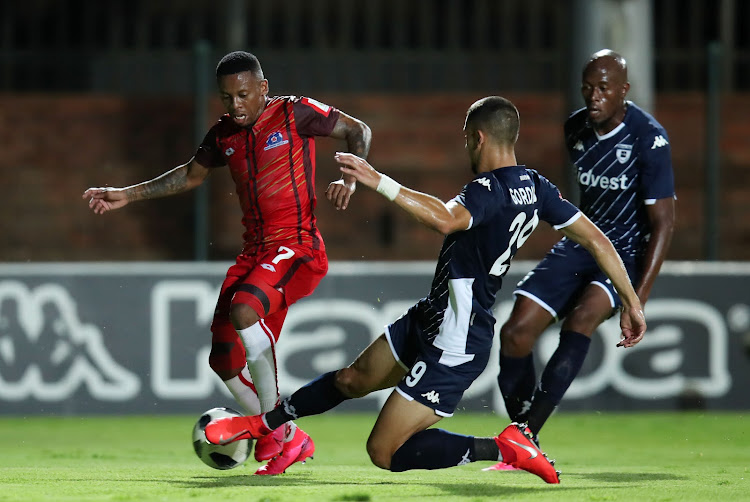 Thabiso Kutumela continued his impressive form for Maritzburg United with yet another goal.
Image: Muzi Ntombela/BackpagePix

Bidvest Wits have a lot of catch-up matches in their Absa Premiership chase, and losing one of those 1-0 at Bidvest Stadium against a keyed-up Maritzburg United on Wednesday night will not help any title ambitions.

Wits coach Gavin Hunt could not have been too pleased at the two teams' cup and league fixturing.

Maritzburg had significantly more rest from their penalties Nedbank Cup win against Stellenbosch FC at Athlone Stadium on Friday.

United coach Eric Tinkler, who has said the emphasis for his top-half team is the highest league finish over a cup run, had also rested players in that game, and had a fresher, near-full-strength line-up back.

Hunt could not afford to rest players in his big Nedbank Cup last-32 match-up against Orlando Pirates at Orlando Stadium, which was played two days later than Maritzburg's on Sunday.

It was also an energy-sapping thriller that went to 120 minutes at 3-3, then was won on penalties by the Clever Boys.

Wits then also faced a Maritzburg who, from Tinkler saving the club from relegation last season, then an iffy start this campaign, have been on form.

A workaholic combination whose coach always brings a plan to matches, Maritzburg lost narrowly in the Telkom Knockout final to Mamelodi Sundowns in December and have won 10, drawn seven and lost just three of their last 20 league and cup matches.

Wits were unable to break United down in the first half, and then conceded from a mistake a minute before the break.

Sekgota gave the ball away just in Maritzburg's half, and it was worked quickly to winger Tebogo Tlolane, who picked out the run of Kutumela catching Wits square on the right.

The little striker had time to place a finish low past Ricardo Goss.

Hunt predictably brought on Hotto and Gift Motupa - for Sekgota and Cameroonian striker Bienvenu Eva Nga - from the break.

But United had the momentum, and if anything upped the intensity to create more half-chances.

Team SA came back from the World Athletics Championships in Doha last year without a single medal - an ominous sign before the Tokyo Olympic Games ...
Sport
2 years ago

"Underestimate us at your own peril" is the warning from Amavarara FC to fellow competitors in the Nedbank Cup.
Sport
2 years ago
Next Article