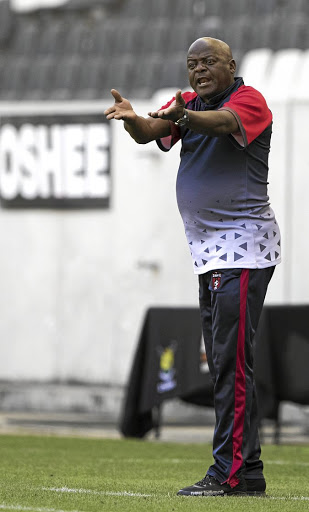 TS Galaxy boss Tim Sukazi is not in a hurry to appoint a new coach following the departure of Dan Malesela.

Sukazi has put his trust on Muisi Ajao and Essau Mtsweni as the interim coaches to take the team forward in the remaining 10 matches of the GladAfrica Championship.

Malesela jumped ship after his side lost 3-0 to Chippa United in the Nedbank Cup last 32 a week ago. "We are still in the same position. I'm flooded with a lot of CVs," Sukazi said. "This complicates matters. The poor guy who is in charge has not played a game. Let them play and see how they perform and we will take it from there."

Sitting 12th on the log standings and 14 points adrift of promotional playoffs spot, Sukazi seems to have thrown in the towel in the race to qualify for the playoffs.

"If we qualify for the play-offs it will be a bonus. We seem far from it, so we just want to compete for any position. TS Galaxy is the fastest-growing football brand and have young, vibrant football staff. It is a club with new ideas and is moving with current times.

"So we aim to be in the Premiership in future. What we have achieved, we created a lot of following, so we need to be in the top league."

Ajao and Mtsweni will be in charge for the first time when Galaxy visit University of Pretoria for their league match on Sunday.

Chippa United coach Norman Mapeza is rubbing his hands at the thought of a run in the Nedbank Cup after his side ousted defending champions TS Galaxy ...
Sport
2 years ago
Next Article