Sundowns coach Pitso Mosimane: 'The league is for Chiefs to lose‚ I mean really' 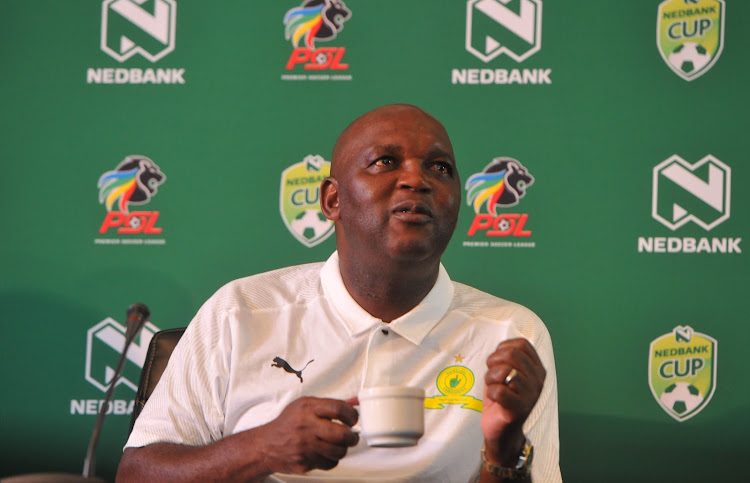 Never one to miss the opportunity to ruffle the feathers of Kaizer Chiefs fans and their coach Ernst Middendorp‚ outspoken Mamelodi Sundowns mentor Pitso Mosimane has warned his bitter rivals to expect ‘a battle royale’ in the league championship run-in.

Mosimane said Chiefs‚ who are ten points ahead of his team on the standings‚ are firm favourites to win their first trophy in five seasons but they must expect a bumpy ride towards the finish line.

“The league is for Chiefs to lose‚ I mean really.

"It is in your hands now but we haven’t given up and we are going for it because anything is possible‚” said an upbeat Mosimane.

He added that Chiefs’ road to redemption is not going to be easy because they still have to play against Wits twice‚ Orlando Pirates in the Soweto derby and against Sundowns.

“You’ll never know because Chiefs still have to play Wits twice and they still have Pirates and us.

"You know that we can also win against them (Chiefs) at FNB Stadium. Those are possibilities‚ I am not saying it’s going to happen but we have to keep going.

“We drew against Wits twice‚ lost to Pirates and that’s the reality.

"Hopefully reality can happen on the other side also to make the league race interesting.

"I think you want the league to be interesting‚ let it be the last two games and it’s equal on points.

"You know we are going to have a photo finish there. Even the last five‚ we can go five in a row and that I can guarantee you. So‚ let it be on the table‚ maybe it will be a good finish.

“Maybe I must speak to Huntie (Wits coach Gavin Hunt) and say Huntie do your work‚ do your stuff my brother.

"You took four points from me‚ so take four points somewhere also. JZ (Pirates coach Josef Zinnbauer) and Gabadinho Mhango) are on form‚ so let’s see what happens. Watch this space.”

Sundowns must win or finish second in the Absa Premiership because lifting the Caf Champions League‚ where they are in the quarterfinals against Al Ahly‚ does not guarantee qualification for continental football in the next season.

“You can’t buy a spot in the Champions League‚ you have to play for it but we will try and get it‚" Mosimane continued.

"That is why it is important for big teams to come and play at this level‚ let’s see who you are and what do you have.

"Combine the Champions League‚ Nedbank Cup‚ the league and let’s see if you can do that.”

Mosimane also dismissed suggestions that he can win a quadruple this year by adding the Nedbank Cup‚ Champions League and the Absa Premiership to the Telkom Knockout they have already won.

“If I say no‚ Sundowns fans will be disappointed with me and say you are not ambitious‚ and if I say yes you are a little bit arrogant and make people to sharpen their swords and knives.”

Mystery has deepened over the status of Orlando Pirates assistant coach Rulani Mokwena after the club said they 'do not know' where he is or how long ...
Sport
1 year ago

"Underestimate us at your own peril" is the warning from Amavarara FC to fellow competitors in the Nedbank Cup.
Sport
1 year ago

It will be a case of seeking redemption when Polokwane City and Baroka face off in the Nedbank Cup last 32 Limpopo derby at Peter Mobaka Stadium ...
Sport
1 year ago
Next Article