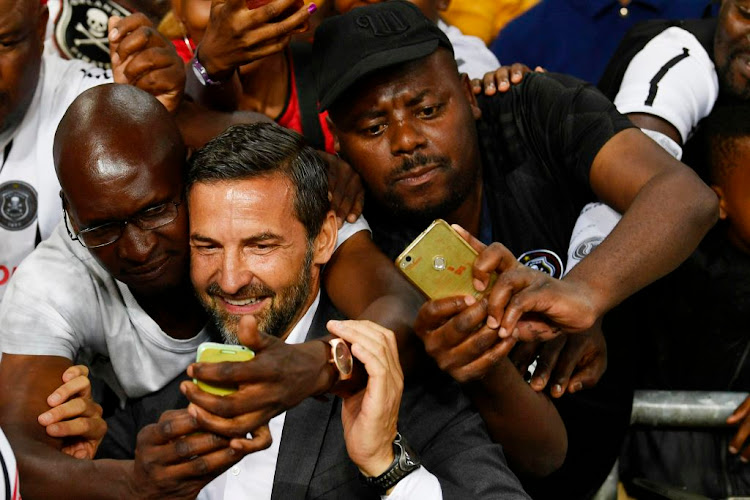 Orlando Pirates mentor Josef Zinnbauer and his striker Gabadinho Mhango walk away with the coach and player of the month accolades
Image: Lefty Shivambu/Gallo Images

Orlando Pirates coach Josef Zinnbauer and his striker Gabadinho Mhango were the undisputed stars of the show for the Absa Premiership for January, winning the league’s coach and player of the month awards on Thursday.

The Buccaneers’ rich vein of form – much of it built around Mhango’s explosive scoring form – were rewarded with the duo of monthly awards at the Premier Soccer League’s offices in Parktown.

Zinnbauer, still new to the PSL, was appointed at Bucs on December 12 with the team floundering in seventh place.

Pirates have won six and drawn one in seven league games since the German’s arrival to shoot up to second place. In January, they drew one and won four of five matches.

In January, Pirates drew 1-1 away against Bloemfontein Celtic, beat Polokwane City 4-1 away, won 1-0 at home against Mamelodi Sundowns, won 3-1 at home to Highlands Park and beat AmaZulu 1-0 at home.

Malawian striker Mhango scored in all but one of those games (the win against AmaZulu), with six goals in five games in January, including just the season’s second hat trick in the win against Polokwane.

Kurt Abrahams is not a name known to many local football fans‚ but the Westerlo forward is closing in on the record of Percy Tau in Belgium last ...
Sport
1 year ago

Orlando Pirates coach Josef Zinnbauer and his striker Gabadinho Mhango were the undisputed stars of the show for the Absa Premiership for January, ...
Sport
1 year ago

Mystery has deepened over the status of Orlando Pirates assistant coach Rulani Mokwena after the club said they 'do not know' where he is or how long ...
Sport
1 year ago
Next Article