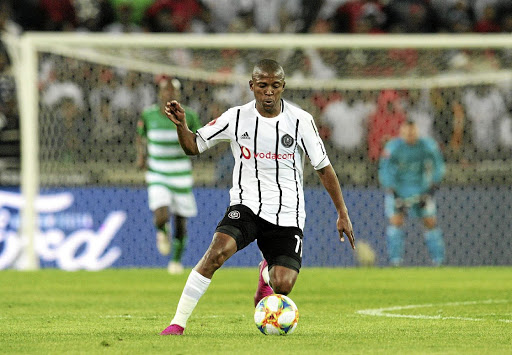 Former Orlando Pirates midfielder Joseph Makhanya believes Luvuyo Memela deserves as much praise for the team's revival in the league.

Bucs have had a resurgence since the arrival of Josef Zinnbauer in December. The team has surged from seventh in the standings to No2 .

When Zinnbauer arrived, the team had 17 points from 13 games. Now they have 36 points from 20 games.

While the free-scoring Gabadinho Mhango has received praise for his form, another crucial cog that is being overlooked is Memela.

"Memela is a brilliant player and he has proven that. He has really been excellent for the team and must get credit also," ex-Pirates star Makhanya said.

"Under Rulani [Mokwena] he wasn't playing and I don't know why. Sometimes coaches have different opinions of their players. I was once a victim of such when a coach comes and doesn't play you.

"I wonder why he was not being used, but at the end of the day the coach is the one who decides. I am happy for him that he is playing. He did well to remain focused and not to give up. Now he has got his chance and making use of it."

Amigo, as Memela is known, has only missed one game under Zinnbauer. He has started seven games in all competitions and has provided six assists.

It's a contrast to his contribution under Mokwena, playing in one match out of 10.

Memela played in the two opening league games of the season under Milutin Sredojevic, but was relegated to the stands when the Serbian left.

The Buccaneers are now nine points behind leaders Kaizer Chiefs with some 10 games to go. With Sundowns (35 points from 18) and Wits (30, 15) in the mix, mathematically the title can go either way.

Makhanya said: "Chiefs still have to play Pirates and Wits so it's still early. All Pirates have to do is to keep pushing until the end."

Pirates next face Black Leopards at Thohoyandou on Sunday (3.30pm), where Mhango will return from suspension.

But Mulenga, Shonga also stake a claim.
Sport
2 years ago

To stop Orlando Pirates striker Gabadinho Mhango, who's arguably in the best form of his life, would take something extraordinary, that's for sure.
Sport
2 years ago

Orlando Pirates are slowly but surely marching on and forcing themselves into Absa Premiership title contention as they continue to notch up win ...
Sport
2 years ago
Next Article