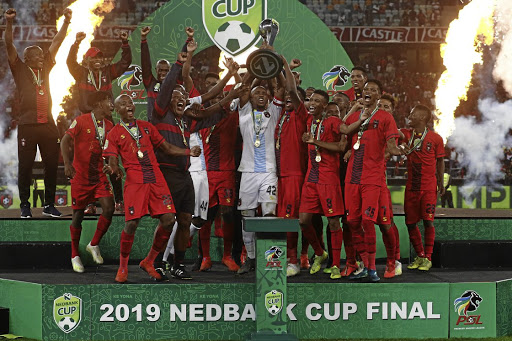 Focus will switch to the Nedbank Cup over the next week as the 16 Premier League sides battle it out with eight each from the GladAfrica Championship and SAFA structures.

There have been a growing list of giant-killing acts in this competition over the last few years‚ suggesting the gap between the professional and amateur ranks is closing.

TimesLIVE provides a quick guide to the Last 32 that will get under way on Wednesday.

Holders TS Galaxy from the GladAfrica Championship have a tough start to the defence of their title when they travel away to Chippa United.

Galaxy stunned Kaizer Chiefs in last year’s final and have in fact won all five of their previous Nedbank Cup matches‚ having only been formed at the start of last season.

Galaxy coach Dan Malesela will make an emotional return to his former employers‚ where he had two spells in charge of the side. AJAX CAPE TOWN VS TS SPORTING

Ajax Cape Town were finalists in the Nedbank Cup in 2015 before an agonising penalty shoot-out loss to Mamelodi Sundowns following a 0-0 draw in Port Elizabeth.

Their stock has fallen sharply since then with relegation to the GladAfrica Championship‚ but they are having a fine campaign in 2019/20 and are on course for promotion once again.

The two sides clashes in Cape Town in the league last month‚ with Sporting emerging as surprise 1-0 winners.

Maritzburg United make the trip to Cape Town to face-off against Stellenbosch‚ hoping this year to repeat their 2018 Nedbank Cup final appearance‚ where they lost to Free State Stars in the decider in the Mother City.

These two asides have only ever met once before and it came in Cape Town earlier this season when they played to a 0-0 draw.

Maritzburg have already made one cup final this season when they lost the Telkom Knockout decider to Mamelodi Sundowns.

Passion FC from the Mpumalanga ABC Motsepe League style themselves on English giants Manchester City with their light blue kit and similar badge‚ and they will hope to show their quality against second-tier Real Kings.

The dream might have been to draw one of the giants of the local game‚ but this perhaps gives them a greater chance to advance to the next stage.

AmaZulu beat Celtic 2-1 in Bloemfontein in late December‚ which will give them plenty of heart for this tie‚ but that was their only win at Phunya Sele Sele since 2009.

Perhaps surprisingly this will be the first ever meeting between the sides in South Africa’s FA Cup despite competing regularly for the last 35 years.

They have‚ in fact‚ only ever clashed in two cup games in any competition.

Super Eagles have been here in the previous two years‚ but will be hoping to make it third-time lucky to as they seek to get past the Last 32 for the first time.

They were a second-tier side in 2018 when they lost 2-1 to eventual champions Free State Stars‚ but were relegated at the end of that season and were part of the SAFA structures in 2019 when they lost by the same scoreline to Bloemfontein Celtic.

Amavarara will make their debut in the Nedbank Cup Last 32 and hail from Komani‚ formerly Queenstown‚ though the game will be played in Mdantsane.

On paper the biggest mismatch in the Last 32 as fourth-tier Vaal University of Technology take on Premier League side Lamontville Golden Arrows.

VUT are debuting at this stage‚ while Golden Arrows have reached the semifinals in two of the last three seasons.

They lost 1-0 to Orlando Pirates in 2017‚ before being surprise 3-1 losers to eventual champions TS Galaxy last year.

Kaizer Chiefs were losing finalists in the Nedbank Cup last season as they went down to TS Galaxy‚ and will face opposition from that division again in Royal Eagles.

Chiefs will be heavy favourites‚ but have had a habit of losing to teams in divisions below them‚ having been ousted on five occasions since 2009‚ including to third-tier Baroka FC in 2011.

Eagles have had a difficult season and sit bottom of the second-tier with just three wins in 20 games this season.

Both clubs will have set their eyes firmly on the prize this season‚ but one will have to face up to a first round exit.

SuperSport have already knocked Sundowns out of the Top Eight competition this campaign‚ but lost a league clash in January.

Uthongathi have been flying high in the GladAfrica Championship this season and will be making their debut in the Nedbank Cup Last 32.

Highlands have already reached a cup final this campaign but lost the Top Eight decider to SuperSport United. They will see this as an opportunity to advance to the next stage.

This will be Highlands’ fifth appearance in the Last 32 and they have only advanced once – in 2019 – when they beat AmaZulu on penalties.

Given that the game ended 1-1‚ they have actually yet to win a Nedbank Cup fixture‚ with a draw and four defeats in their five previous games.

Second-tier Jomo Cosmos will take on Northern Cape ABC Motsepe League side Hungry Lions in their Last 32 clash and will be wary of their unknown opponents.

Cosmos have made at least the second round in all eight previous Nedbank Cup seasons that they have competed in‚ twice going as far as the quarterfinals (2012 and 2017).

They have only once gone out to teams a division below them in that time‚ when they succumbed to a penalty shoot-out defeat at the hands of Nathi Lions in 2008 following a 0-0 draw.

Wits won a thriller 4-3 when the teams met in the league earlier this campaign‚ while incredibly there has not been a draw in any of the last 15 tussles between the clubs in all competitions‚ with Wits having won nine of the last 11 meetings between the sides.

Leopards were losing finalists in 2011 while still a second-tier side‚ and have been past the Last 32 in eight of their previous 10 visits to this stage of the competition.

They have never lost to opposition in a league below them‚ so the university side have the opportunity to make some history.

Cape Town City will have the opportunity to avenge arguably their most surprising defeat when they return to the Mpumalanga province to meet Mbombela United.

City were enjoying an excellent maiden season in the Premier League after being formed in June 2016‚ when they debuted in the Nedbank Cup away at Mpumalanga ABC Motsepe League side Acornbush United.

The Mother City side were expected to advance with a routine win‚ but ended up losing 1-0 to the minnows‚ a result that will still sting.

Zizwe United are from the Cape Town suburb of Nyanga‚ while fellow third-tier side Wanderers hail from the KwaZulu-Natal coastal town of Margate.

Zizwe are appearing at this stage for the first time‚ but Wanderers were involved in the Nedbank Cup Last 32 in 2018‚ when they were narrow 1-0 losers to provincial rivals Royal Eagles.

The clubs met last month‚ with Baroka claiming a 1-0 success as Ranga Chivaviro netted an early penalty to settle the contest.

Baroka have the edge down the years‚ with three wins to two for Polokwane‚ and four matches ending in draws.

Baroka have a special history in the Nedbank Cup having ousted Moroka Swallows and Kaizer Chiefs while still in the third-tier in 2011.

After an emphatic group stage campaign where they were unbeaten, Mamelodi Sundowns will be banking on their fortress in Pretoria in the knockout ...
Sport
1 year ago
Next Article