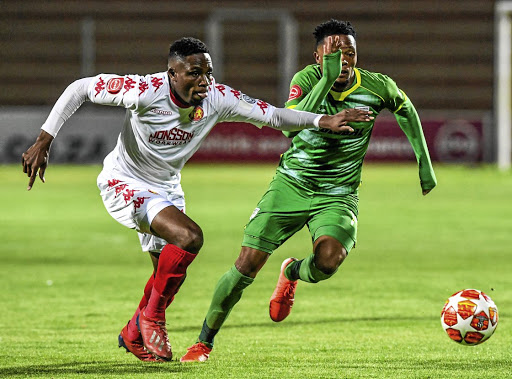 The seven minutes added time by referee Jelly Chavani at the end of the Absa Premiership fixture between Highlands Park and Baroka on Saturday caused so much anxiety among the Tembisa club's ranks.

At the end, management, players and fans of the Lions of the North were so jubilant, one would think Highlands had won the league.

Their celebration is understandable because they were on a knife-edge and anything could still have happened to their 1-0 lead, courtesy of defender Bevan Fransman who headed home a long throw-in by Ryan Rae in the 70th minute.

Bakgaga threw everything into the game in search of an equaliser and they were almost rewarded, but Gerald Phiri Junior's free-kick was cleared off the line.

Mothobi Mvala, who was stretchered off the pitch after an injury to his knee in the 44th minute, tried hard to put on a brave face as he sat alone on the bench while his teammates celebrated their victory.

Not only must Highlands Park dish out combustible football tomorrow, but they will have to get back to winning ways if they are to retain the ...
Sport
1 year ago

Steve Barker says he has never felt threatened in his job as Stellenbosch FC recorded a third win in a row at the weekend to move from the relegation ...
Sport
1 year ago

"Finally, we've won," he said, adding: "Where does this win take us on the log?"

The Lions of the North are back in the top eight bracket. They are coming off three consecutive losses.

Rae described their victory as a relief.

"We had been under enormous pressure. I wouldn't say we've turned the corner, but instead we need to work harder to actually turn the corner. Everything that I do is to help the club and I am delighted that my throw-in resulted in a goal."

Coach Owen da Gama said: "It gave us as management time to motivate the players and calm them down while working harder in the gym."

His opposite number Dylan Kerr said: "Not a good result, obviously, but we fought hard and actually it was anybody's game."