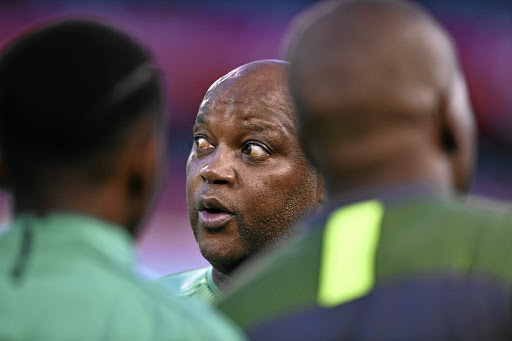 Outspoken Mamelodi Sundowns mentor Pitso Mosimane stared down the barrel of a loaded gun and dared the Premier Soccer League to charge him after he labelled referee Abongile Tom an amateur.

Title-chasing Sundowns drew 0-0 with rivals Bidvest Wits at Loftus on Tuesday night and an irate Mosimane turned his attention to Tom at the conclusion of he encounter, insisting that the match official delivered an amateurishly below par performance.

Mosimane did not hold back and berated Tom for allowing Wits captain Thulani Hlatshwayo to finish the match despite numerous crunching tackles.

He also took exception to the yellow card that was issued to Themba Zwane.

PSL prosecutor Nande Becker asked Mosimane to explain himself the last time he criticised match officials but the unfazed Sundowns mentor defiantly insisted that he would continue to express his opinion.

"They can come, it is normal," Mosimane said.

"I praise the referee and I am called, when I criticise them then it is a murder charge. I mean, really. If they call me it's OK, it's part of life. It's the way it is."

Outspoken Mamelodi Sundowns mentor Pitso Mosimane stared down the barrel of a loaded gun and dared the Premier Soccer League (PSL) to charge him ...
Sport
2 years ago
Next Article