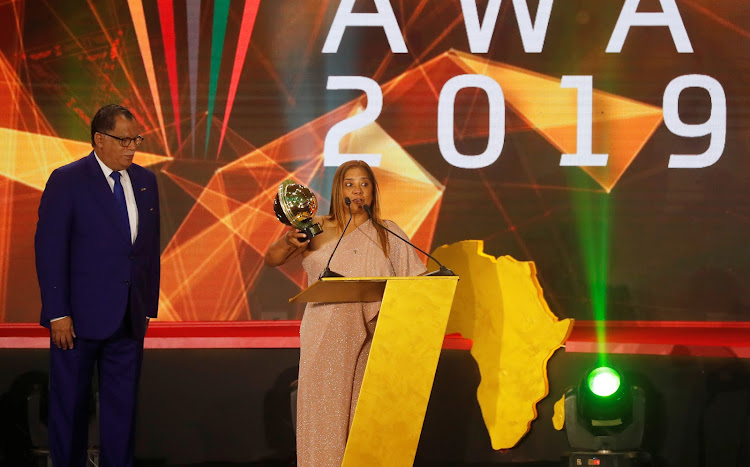 Ellis was rewarded for leading Banyana at their first Fifa Women’s World Cup‚ as well as lifting the regional Cosafa Women’s Championship title for a third year running.

She is just the second coach – male or female – to win back-to-back awards and the first since the late Frenchman Bruno Metsu did so after his exploits with Senegal in 2001 and 2002.

The category for Women’s Coach of the Year was only introduced in 2018‚ meaning Ellis is the only winner so far.

She was presented with the award at the gala Caf Awards event in Egypt by SA Football Association (Safa) president Danny Jordaan.

The former may feel unfortunate having guided Cameroon to the second round of the Fifa Women’s World Cup in their maiden appearance.

Cameroon did win the Women’s National Team of the Year ahead of South Africa and Nigeria‚ while Banyana star Thembi Kgatlana missed out on back-to-back Women’s Player of the Year titles after she lost out to her hero‚ Nigeria’s Asisat Oshoala.

Kgatlana had been nominated for a third year in a row‚ which is an excellent achievement.

Ellis has now made it three Coach of the Year titles in all for South Africa after Pitso Mosimane won the 2016 men’s trophy having guided Mamelodi Sundowns to the Caf Champions League that year.

Only Nigeria and France (five each) have had more wins across the two coaching categories since the men’s trophy was introduced in 2000.

Liverpool and Senegal star Sadio Mane walked away with the men’s African Player of the Year title‚ while Djamel Belmadi was named Coach of the Year after guiding Algeria to the Africa Cup of Nations title.

ALL THE CAF AWARD WINNERS

Just before the festive season started, I had my mind made up. I was going to write a column about the leadership lessons President Cyril Ramaphosa ...
Opinion
2 years ago
Next Article