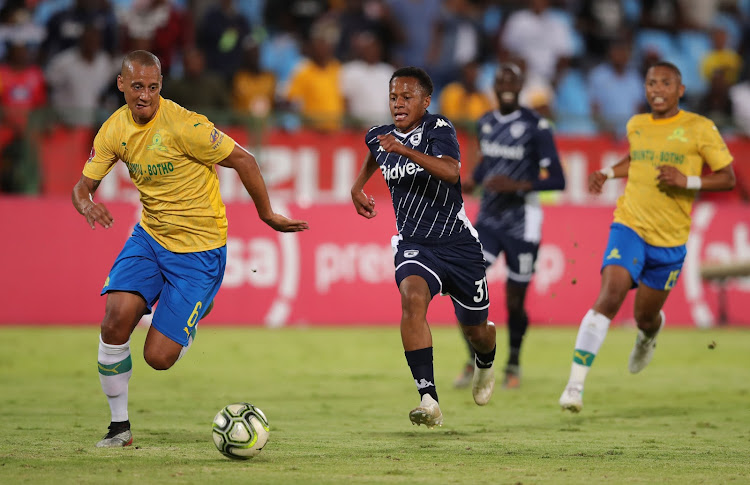 Mamelodi Sundowns were held to a goalless draw by ten men Bidvest Wits during their exciting Absa Premiership encounter at Loftus on Tuesday night.

This share of the spoils has left the Brazilians three points adrift of log leaders Kaizer Chiefs but Amakhosi have an opportunity of further stretching their lead when they host Highlands Park at FNB Stadium on Wednesday.

It also brought to an end Sundowns’ two match winning streak in the league following wins over Polokwane City in December and AmaZulu last weekend.

Those two wins were between a crucial 1-9 Champions League win over USM Alger whom they meet in the return leg at Loftus on Saturday.

For Wits, this vital away point has moved to third spot on the standings with 27 points from 13 matches and they also missed out on registering a third consecutive win.

Sundowns coach Pitso Mosimane started this match with the same team that convincingly thrashed AmaZulu 3-0 last weekend in Durban in their first game of the year.

Mosimane was without the services of injured midfielder Gaston Sirino while Wits coach Gavin Hunt could not field influential Thabang Monare who was suspended.

In the opening 30 minutes, there were two notable scoring chances from the close range headers of Phathutshedzo Nange who was denied by Denis Onyango and Sphelele Mkhulise who went wide off the target.

Sundowns nearly took the lead shortly before the half-time break when Lebohang Maboe connected with a pin-point cross from Tebogo Langerman but he was denied by the stunning reflex save of Wits ‘keeper Ricardo Goss.

Wits suffered a major blow after 56 minutes when key defender Buhle Mkhwanazi was sent for an early shower for an unsporting tackle on Maboe on the edge of the penalty box.

Sundowns used their numerical advantage to launch relentless attacks at the Wits defence and a few minutes later Sibusiso Vilakazi was unlucky when his close range shot rebound off the upright with Goss beaten.

Ten minutes from time, Vilakazi was denied by Goss again who tipped his snap shot from close range over the cross-bar after he received a clever pass from Themba Zwane.

Sundowns created most of the chances in the closing stages with Zwane, Vilakazi and Andile Jali on the forefront but he Wits defence that was marshaled by Thulani Hlatswayo stood firm to earn a valuable points.

Before the match, Sundowns presented their captain Hlompho Kekana with a commemorative plaque for his feat of having played more than 300 games for the club.

He reached the 300 mark in December when he scored in the 1-0 win over USM Alger in the Champions League, group stages match in Algeria and he is currently sitting on 302.