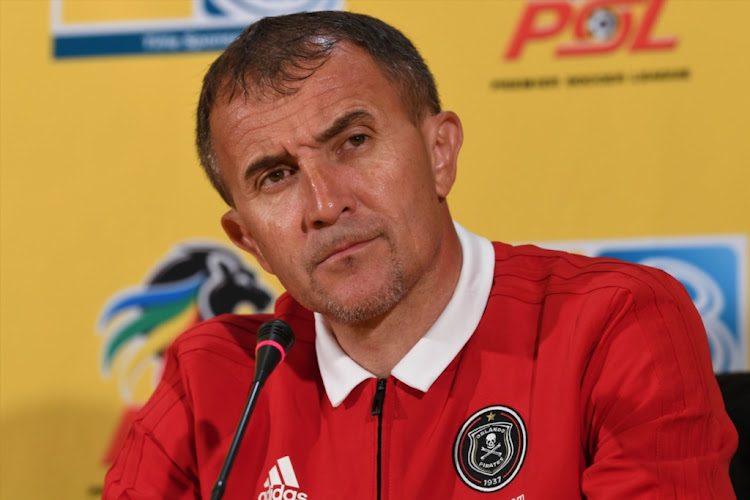 Orlando Pirates coach Milutin Sredojević said he becomes “extremely emotional” whenever he has to talk about Brilliant Khuzwayo and likened the goalkeeper’s energy in the team to that of a “Zulu warrior”.

The 29-year-old Khuzwayo shocked the South African football fraternity on Wednesday with his injury-enforced announcement that he is retiring from the game after battling with knee operations in recent seasons.

Khuzwayo joined Pirates from rivals Kaizer Chiefs at the beginning of last season but failed to make a single appearance for the Sea Robbers due to injuries.

Experienced Wayne Sandilands and the erratic Siyabonga Mpontshane were the preferred choices between the goalposts for Sredojević last season.

“For me it is extremely emotional talking about Brilliant Khuzwayo‚ you know‚” Sredojević said after his team’s training session at Rand Stadium in the south of Johannesburg on Thursday.

“I have already mentioned once that as a kid growing up in my country I was as a kid playing football but also was part of a supporters group named ‘Zulu Warriors’.

“I never knew that I will come into the country called South Africa and when I think about Brilliant I will just say it has been a magnificent time and unbelievable memories with him.

“I call him a Zulu warrior because he really reminds me and resembles everything in that regard.”

Sredojević said Khuzwayo was “a positive generator of energy in the team”.

The Serbian coach said it pained him to see the goalkeeper contributing positively behind the scenes but unable to make the team due to his recurring injuries.

“It was terrible looking at him and what you expect from a player and you know that he can deliver but on the other side that bridge between a medical decision and that desire to play him‚ and all of us we are really shocked‚” the coach said.

“We have always believed that the time will come where we will have him in the team goals. But unfortunately it was not meant to be.

“God bless your future endeavours but in the same moment we need to know that he leaves great memories with us because of his special character.

“In the morning when we are having our pre-training prayers and you have him‚ when he comes in front of you‚ even if you are strong you will start to smile because you cannot not have a positive moment when you come in the morning with him there.

Sredojević said he hopes that Khuzwayo will continue to serve in football in another capacity.

“Now he has gone and unfortunately those doors have been closed. He is not with us but we know that he will always be with us and will always be in the game of football because he needs football and football needs him.”

Khuzwayo made his PSL debut for AmaZulu in September 2010 in a 2-2 draw against now-defunct Platinum Stars.

He played just three matches for Usuthu before being loaned out to Thanda Royal Zulu before Kaizer Chiefs snapped him up on at end of the 2011-12 season.