Salvos fired ahead of Soweto derby 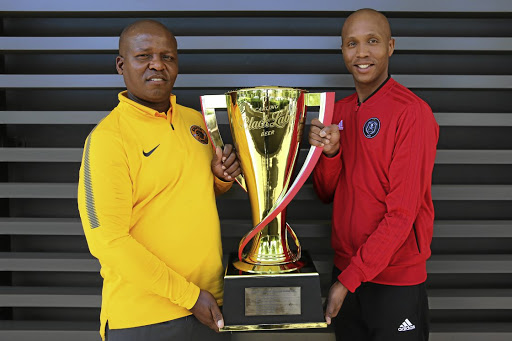 After the recess, the thirst for Premier Soccer League football is about to be quenched tomorrow, and the puffing of chests between the two protagonists have already began in earnest.

The Carling Black Label Cup, featuring two of SA's finest, Orlando Pirates and Kaizer Chiefs, will kick off the local football season proceedings, and as they have done since the inception of this competition, the competition has rolled out two champion coaches who have been selected to take over the reins.

The Phefeni Glamour Boys' champion coach Tsietsi Benny Majoro was the first to fire a volley at his Pirates counterpart Kagisho Moleme.

Free Staters to lead Chiefs and Bucs on Saturday.
Sport
2 years ago

"We have no intention of relinquishing our trophy to Pirates. The fact that the competition was not staged because of the Fifa World Cup in Russia last year, only made us as Amakhosi hungrier," said Majoro.

No slouch in the game of banter, Moleme fired back, telling Majoro that nothing will stop the Buccaneers from winning for the fifth time.

The two lads, who both coincidentally hail from the Free State, took full advantage of the Beer Cup's vow to maximise the fans' experience, by calling Sesotho radio station Lesedi FM.

The two coaches declined to disclose what their formations and starting line-up will be, but appealed to fellow fans to fully participate in the festivities by filling up the FNB Stadium and making their presences felt on all social media platforms.

"We appreciate this competition for remaining fresh, and finding new innovative ways to engage the fans. For example, this year the fans have been given the opportunity to select game-changers, and will be voting for Man of the Match, favourite captain and substitutions," Moleme said.

Kaizer Chiefs will keep their eye on the market and their options open to add to the four signings they have already made ahead of the 2019-20 season ...
Sport
2 years ago

Justice Chabalala ready to prove his worth against Amakhosi