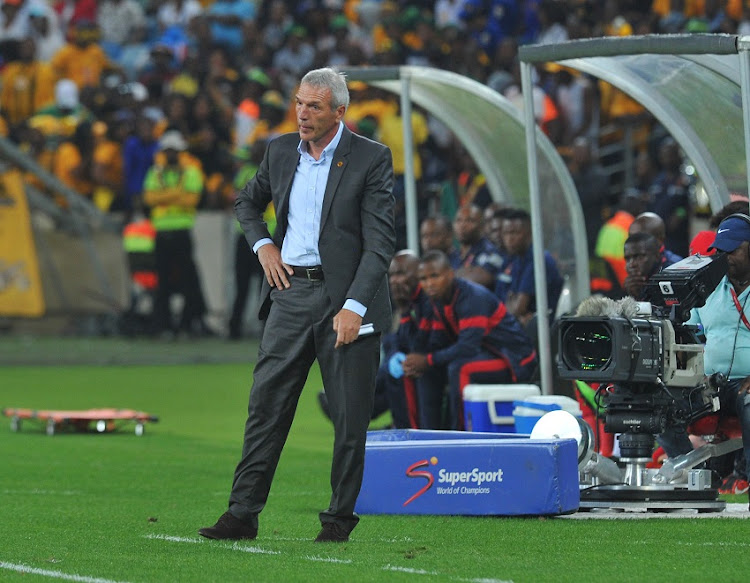 Ernst Middendorp coach of Kaizer Chiefs during the 2019 Nedbank Cup Final match between Kaizer Chiefs and TS Galaxy on the 18 of May 2019 at Moses Mabhida Stadium.
Image: Sydney Mahlangu/ BackpagePix

Kaizer Chiefs will keep their eye on the market and their options open to add to the four signings they have already made ahead of the 2019-20 season should the right players be available‚ coach Ernst Middendorp has said.

Chiefs have made the impressive signing of highly-rated Zambian forward Lazarous Kambole from Zesco United.

Amakhosi supporters might be wondering if the club have done enough on the transfer market‚ given they are trying to reverse four seasons without a trophy.

“Let’s observe. We always watch the market and‚ as a club‚ if you are responsible you never should say‚ ‘No’‚” the coach said.

“As long as the opportunity is there‚ and the transfer market is open until the end of August‚ and we will have a look.”

Middendorp said there were criteria for their signings.

Chiefs have promoted a number of players from their development ranks in the past two seasons‚ and have continued for this campaign.

They have signed experienced players who were earning game time at their clubs to balance that.

“And I’ve said it over the past five‚ six months that it’s not a one-man show. It’s a one-man show in terms of blaming – I’m aware about that.

“But we have a very clear structure inside this big brand‚ having scouted around and having a very clear identification before the signings were done.

“It was important for us to put some parameters into it – probably not going for 19‚20 years old‚ but going for guys in an age of between 24 and 28.

“We wanted to see that these players had no handicap in terms of being injured or being parked in a dustbin with other clubs.

“That they had regularly played more than 30 games at their former clubs – in Europe‚ Australia‚ Zambia or Tanzania.”

Kambole (30) has starred for Zesco in the Champions League‚ as has Kotei (25)‚ as his Tanzanian club Simba FC reached the 2018-19 quarterfinals.

Baccus (27) has played more than 130 games in the Australian Premier League and Nurkovic (27) scored 23 goals in 28 games for KFC Komarno in Slovakia last season‚ albeit in the second division.