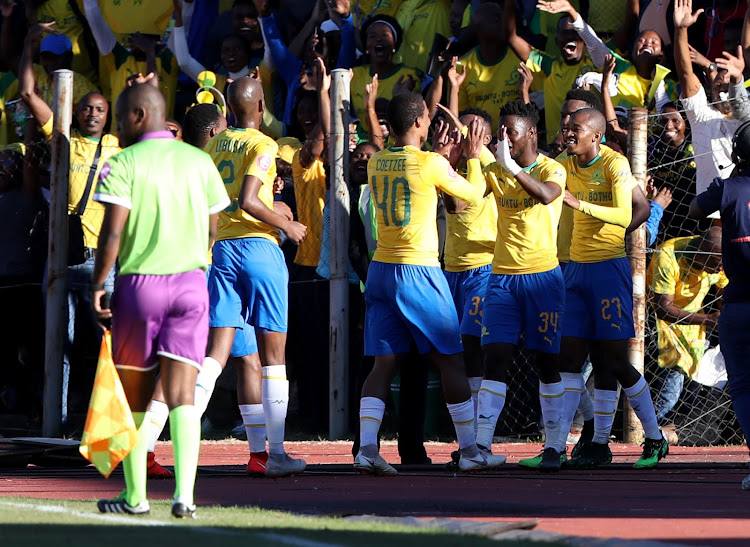 Mamelodi Sundowns have been crowned Absa Premiership champions after a 1-0 win over Free State Stars at Goble Park in Bethlehem on Saturday afternoon.

This occasion also marked the relegation of Free State Stars to the National First Division (NFD) after 12 years in the top flight.

Sundowns, who were playing in their 50th match of the season in all competitions since August when they opened the season, ended their season with an unassailable 59 points which is two ahead of second-placed Orlando Pirates.

Sundowns have now won nine Premier Soccer League (PSL) titles and this win will surely go a long way in erasing the bitter memories of last weekend where they failed to qualify for the second Caf Champions League final after they lost 2-1 to Wydad Casablanca on aggregate.

It is also a latest layer to the genius of coach Pitso Mosimane who has won four league titles in just over five years at Chloorkop and he joins an exclusive list of celebrated mentors Jeff Butler, Gordon Igesund, Ted Dumitru and Gavin Hunt who have achieved the same feat.

There was another significant milestone for Sundowns industrious captain Hlompho Kekana and goalkeeper Denis Onyango who have joined former SuperSport United and Pirates winger Daine Klate as the three most decorated players in the PSL with six league titles.

Kekana once again led with aplomb in the heart of midfield to further enhance his reputation as the front runner for the coveted Player of the Season award where he faces strong challenge from Thembinkosi Lorch of Pirates.

Onyango will also have a shout for the goalkeeper of the season after what has been a good season between the poles in this campaign that has its ups and downs.

On the other hand, relegation to the NFD will definitely be a bittersweet for Stars inspirational captain Paulus Masehe who has already announced retirement from the game.

Sundowns victory is an indictment to the rest of the teams in the PSL because the Brazilians were playing in the group stages of last season’s Champions League, where they failed to progress to the knockout stages, when everyone was in pre-season.

Sundowns came to Goble Park with a simple equation of winning by any margin and they managed to achieve their mission through a solitary goal by Phakamani Mahlambi three minutes from the half time break.

Mahlambi was only on the field for five minutes when he landed the decisive blow after he came on as a forced substitute for influential midfielder Gaston Sirino who could not continue after he was roughed up by a Stars defender.

When they made their way back to the dressing room at half time, Stars, who started the match third form the bottom, were sitting dangerously at the foot of the table and relegated to the NFD because results of other matches involving teams in the drop zone.

Sundowns dominated the opening exchanges with their best chances falling for Lebohang Maboe, whose close range header could not find the target, and Kekana who blasted the ball at Stars ‘keeper Alli Sangare instead of laying it to better positioned Sirino.

With Pirates leading in Johannesburg, the Brazilians upped their tempo and they created two attacks in quick succession around the 25th minute through Sirino and Themba Zwane but the Stars defence stood firm.

Though Sundowns created most of the chances, Stars also had their moments in the attack and their most notable was on the half hour mark when Katlego Mokhuoane forced a good save out of Denis Onyango.