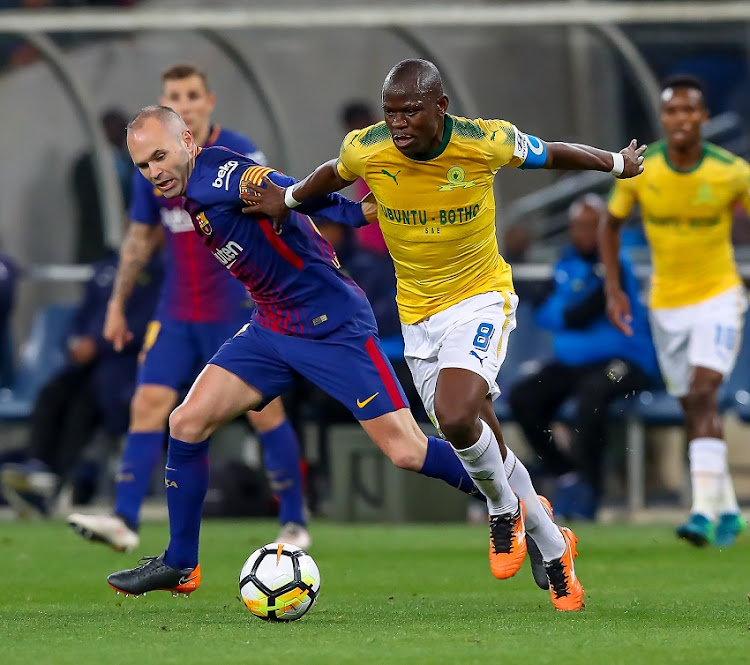 Hlompho Kekana (c) of Mamelodi Sundowns shields the ball from A. Iniesta (c) of Barcelona during the International Club Friendly match between Mamelodi Sundowns and Barcelona FC at FNB Stadium on May 16, 2018 in Johannesburg, South Africa.
Image: Gordon Arons/Gallo Images

Hlompho Kekana will join Daine Klate as the league’s most decorated footballer on Saturday should Mamelodi Sundowns annex the title at the expense of Orlando Pirates.

Should Downs – leading the Absa Premiership with 56 points to second-placed Pirates’ 54 ahead of Saturday’s final round of matches – confirm the title it will be Kekana’s sixth championship success‚ matching that of his former teammate Klate.

Klate had won a previous league title with SuperSport in 2007-08‚ a season in which Kekana still played for Black Leopards.

Kekana has won three subsequent championship medals with Sundowns in 2013-14‚ 2015-2016 and last season‚ bringing him to five.

The Bafana Bafana defensive midfielder‚ who turns 34 later this month‚ is hot favourite to be named Premier Soccer League (PSL) Player of the Season with his coach having already sung his praises repeatedly.

“I always speak about my players‚ I love my players so much. Kekana [is] unbelievable‚ maybe my Footballer of the Year‚” Pitso Mosimane said just weeks ago.

“Every time there is a midfielder who pops up and beats him‚ I don’t know by one or two votes.

“But I’d vote for him for Footballer of the Year. He’s 33‚ it's unbelievable.

“He is a pleasure to watch – unbelievable.”

Mosimane is also chasing a landmark of his own and will join the list of the country’s most successful coaches.

But Mosimane will match Butler as the fastest coach to have won four titles in the PSL or NSL era in just five years‚ 2014 to 2019.