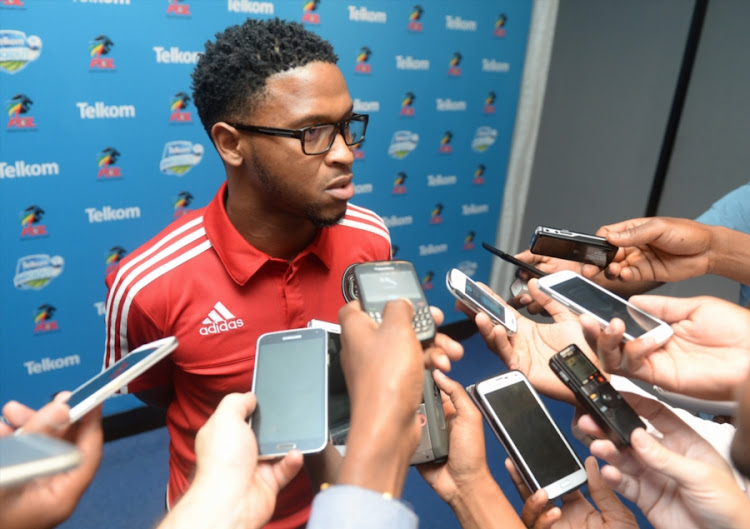 Thandani Ntshumayelo has joined Baroka FC and is looking to resurrect his career with the Limpopo club.
Image: Lefty Shivambu

Baroka FC coach Wedson Nyirenda has said that Thandani Ntshumayelo can play a big role in the club’s remaining six matches to help fight off relegation if the midfielder proves his fitness during the two-week international break.

The Limpopo club on Monday announced the acquisition of the 28-year-old on a three-month deal with an option to renew the contract for two more years.

Ntshumayelo has nursed himself back to fitness from a two-year ban for substance abuse‚ reduced from four years recently‚ training with his old SuperSport United coach Gavin Hunt at Bidvest Wits for five months.

Hunt eventually turned the former Orlando Pirates midfielder down on contract‚ but he has found one at Baroka.

Having trained at Wits since September last year‚ Ntshumayelo’s physical condition ought to have improved and Nyirenda confirmed that the player is not too far off from full fitness.

“He is still a little bit behind in terms of fitness but we are working on it. We are doing a lot with him with the physical trainers‚” Nyirenda said.

Although he has not played competitive football for two years‚ Ntshumayelo has tons of top flight experience that Nyirenda believes will benefit the club steer away from relegation.

“This is the main reason we signed him‚” said Nyirenda‚ having worked with Ntshumayelo just over a week ago.

“I think he can add value to the team.

"I liked the commitment of the boy. He is showing a lot of discipline in training sessions and I think it won’t take much time for him to break through [into the starting lineup].

“I think with his experience he should be able to help us [move away from relegation zone]‚” Nyirenda said.

Baroka FC boss Khurishi Mphahlele has backed under-fire coach Wedson Nyirenda to steer the club out of the relegation quagmire.
Sport
3 years ago

The two-week break Fifa internatinal will come as a blessing in disguise for Ntshumayelo as it will give him a chance to gain full fitness and potentially kick a ball in anger before the season concludes on May 11.

“In these three months and in the remaining six matches I think he will play a big role‚” added Nyirenda‚ who stopped short of saying Ntshumayelo may be in his matchday squad when Baroka meet Kaizer Chiefs in the Absa Premiership at FNB Stadium on Saturday‚ April 6.

“We are blessed that we have these two weeks’ break because this is the time that we have to work on him quickly so that by the time we resume the games he will be in contention for selection‚” Nyirenda said.

Ntshumayelo’s career was nearly ended just as it was peaking when he was banned for four years in August 2016 for testing positive for cocaine while at Pirates‚ in July 2016.

Ntshumayelo’s sentence‚ however‚ was lifted on appeal in September last year having already served two years.

Reports that Thandani Ntshumayelo was on the verge of signing a contract for Wits this past week were incorrect‚ CEO Jose Ferreira has said.
Sport
3 years ago

“First and foremost I think he is human like everyone else. He is human. I am someone who believes that people deserve second chances‚” Nyirenda said.

"We make mistakes as a people. If there’s anybody out there who says he has never made any mistakes in his life then that individual should be an angel and should not be living with us on this planet earth. Who am I not to give somebody a second chance?

“I used to watch Ntshumayelo play for Pirates when I was still coaching back in my home country in Zambia and I love his game. I just like his personality.”

Baroka have won just once in their last nine games and are candidates for relegation.

They are second-from-bottom in the PSL on 21 points from 24 matches and are just four points from an automatic relegation spot.