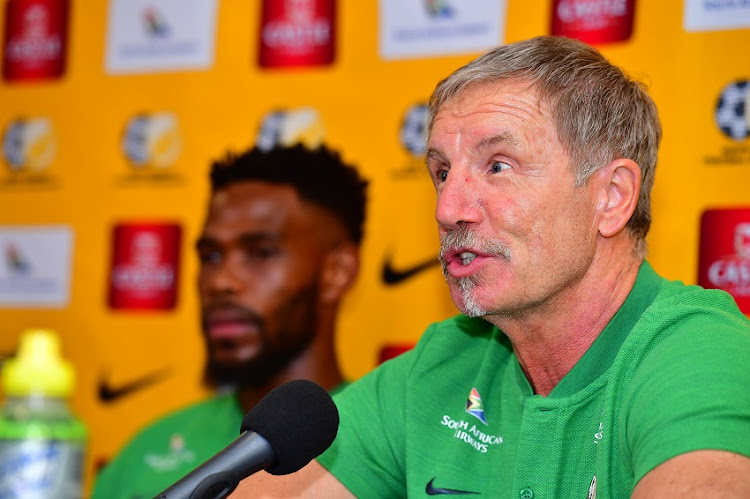 Bafana Bafana need to try to take their qualifier against Libya in Tunisia on Sunday by the scruff of the neck with an aggressive gameplan‚ imposing themselves rather than trying to defend‚ national coach Stuart Baxter has said.

Leaders Nigeria‚ on 10 points‚ have qualified.

Playing for a draw can lead to confusion in approach‚ even subliminally.

Bafana can be a brittle team – they beat Nigeria away for a first competitive victory against the Super Eagles‚ and drew away against Seychelles in this one schizophrenic qualifying campaign.

So‚ even if South Africa have gone unbeaten and conceded just one goal – in the 1-1 draw against Nigeria in Johannesburg – going to North Africa to defend against a Libya who penetrated Bafana with a dangerous counterattack in the 0-0 draw in Durban would be foolhardy.

Baxter said he wants an aggressive approach‚ trying to control the game and leaving as little as possible to chance in Sfax.

“I think the gameplan has to be quite aggressive.

"I think it has to be with a great attention to our defending‚ without having that impact negatively on our desire to get at them and at their throat every time we can.

“It’s also a difficult one to answer because you don’t know how Libya are thinking.

“They may be thinking‚ ‘Well‚ for goodness sake‚ don’t go all gung-ho in the first half-hour so that they [Bafana] turn us [Libya] over and score. So should we build into it?’

“Or‚ should they be very emotional and come flying at us.

“We’ve got to have a gameplan for no matter what they do. And I think we can.”

SA have been based in capital Tunis since their arrival on Sunday‚ and are training their until Thursday‚ when they will take a 270-kilometre bus trip to Sfax and have two training sessions in two days at the match venue‚ the 25‚000-seater Stade Taïeb Mhiri.

This was due to inadequate training facilities in Sfax.

Libya‚ who have to play in neighbouring Tunisia due to the unstable security situation in their country‚ have been based in Sousse‚ 130km from Sfax.