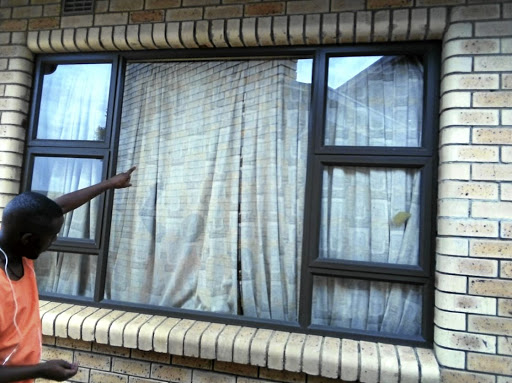 Siyamthanda Sogoni points to the house windows with no burglar proofing after his mother had paid R18,000.
Image: SUPPLIED

Gloria Sogoni was renovating her house when she decided to buy burglar proofing from Trellidor in 2009.

Sogoni, 53, of Dube Village in Soweto, said measurements were taken after the service provider agreed to enter into a lay-by agreement.

She was only given a quotation and no time limit upon which she would pay for her burglar bars, said the mother of two.

Sogoni never visited the Soweto branch thereafter but continuously deposited payment into its bank account until 2014 when she discovered the branch had closed, she said.

She said she expected Trellidor to call her to collect her goods as it was expected to put them away until they were fully paid for, or to let her know they were closing down.

"In the past, most companies which offered lay-by agreements would send a registered letter to ask clients to pay off and collect their goods before they closed down," Sogoni's said.

Where a consumer cancelled the agreement at any time, the store had to repay all the monies paid minus 10% as a cancellation penalty.

She said her consolation was that Trellidor still existed in the country. Then she began her search for other branches and she found one in Randburg. The branch was really helpful as it managed to get her quotation from its head office in Durban, but nothing happened thereafter.

She was later told her initial payment was done 10 years ago and it would not be possible to trace the amounts paid into the Soweto branch as its account was also closed.

Kevin Bonner, national sales and marketing manager at Trellidor, said they were investigating Sogoni's complaint for burglar proofing that was not installed.

He said changes in the ownership of the Soweto franchise resulted in the closure of the owner's bank account. This makes tracing the alleged payments difficult as the Trellidor head office has no record of her transactions, he said.

"In addition, the deposit was allegedly paid 10 years ago directly into the previous franchise's own bank account and as such we have no evidence of payment of this deposit."

He said Trellidor will follow through with investigations as it values all its customers.

"If this is shown to be a valid case, we will attempt to assist Sogoni as far as possible."

The Consumer Protection Act makes lay-by agreements more attractive to consumers now because the store may only retain 1% of the purchase price of goods if the consumer cancels the contract. If a consumer sets aside a dress and pays R100 for four months and then cancels, the store must refund R394 and keep R6;

The lay-by must be in writing and the goods must be put aside immediately the deposit is paid for the agreed term; and

The goods remain the property of the store until the consumer pays in full.

Sourced from the Consumer Protection Act.