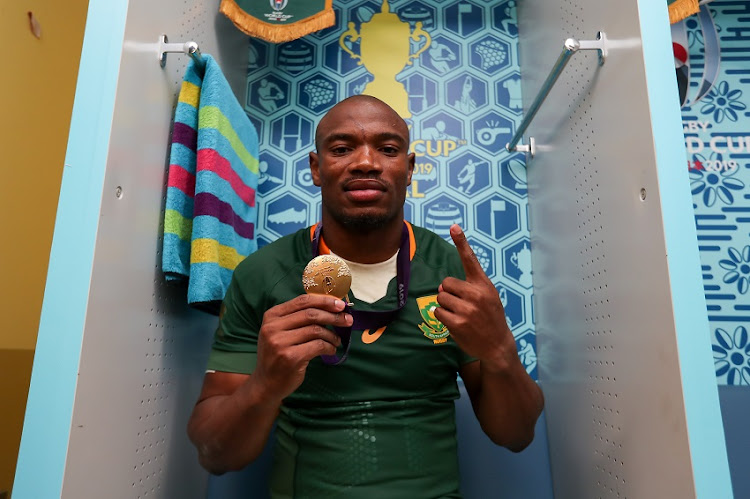 Makazole Mapimpi, South Africa's top try scorer at the Rugby World Cup, didn't quite believe what him and his team mates achieved by winning the tournament.

Mapimpi scored SA's first ever try at a Rugby World Cup final when he latched onto Lukhanyo Am's magical pass.

South Africa then led 25-12, from where Cheslin Kolbe scored the second try to completed the 32-12 rout of England in Yokohama on Sunday.

Seated in the centre of the group trotted out for the media at the team's arrival at the OR Tambo International Airport, where he was flanked by some of his team mates, assistant coach Matt Proudfoot and Sports minister Nathi Mthethwa and his deputy Nocawa Mafu, Mapimpi was still grappling with the magnitude of the individual and the team's achievement.

The significance of the third Rugby World Cup title though wasn't lost on the 29-year-old from Tsholomnqa in the Eastern Cape.

“It's a big thing for me and for people from the rural area. I feel like there were a lot of people watching me and supporting me. I don't quite believe what I've done or achieved. I spoke to Lukhanyo Am after the game and he told me: 'We've won the World Cup',” Mapimpi said.

“It's a big deal for me, I can't lie and it's a big thing for Eastern Cape people and where I'm from. There are young kids who may have been watching and learnt so much from this win. I couldn't believe that I could make the Springbok team. It's a blessing, it's amazing and I'm happy about that.

In a year where South Africa tragically lost the left and the right wingers from the 1995 Rugby World Cup final in Chester Williams and James Small, it was fitting that Mapimpi and Cheslin Kolbe scored the tries.

Williams and Small played critical roles in the 1995 campaign but in a different era 24 years later, Mapimpi and Kolbe bettered their work.

Mapimpi, who did well to rein in his emotions, said nerves nearly got the better of him and still struggles to find the words to describe the successful Webb Ellis Cup journey.

“I'm at a loss for words and the least I can say is thank you very much. I really don't have words, but before the game, I spoke to Cheslin Kolbe and I told him I don't really know what's going on with me, I'm scared and it's a final. He told that we're with Jesus and it's going to be amazing,” a star struck Mapimpi said.

“It was good for me to be nervous. I didn't think about scoring but I know it's my job on the field. It was amazing for me and I'm proud of myself, my team and the South African people who supported us. I really don't know what to say.”

The Springboks touched down in SA on Tuesday November 5 2019 after their 32-12 win over England in the Rugby World Cup final in Yokohama, Japan. The squad arrived at Johannesburg's OR Tambo International Airport, where thousands of South Africans were waiting for them - proving once again that the country will always back our boys.