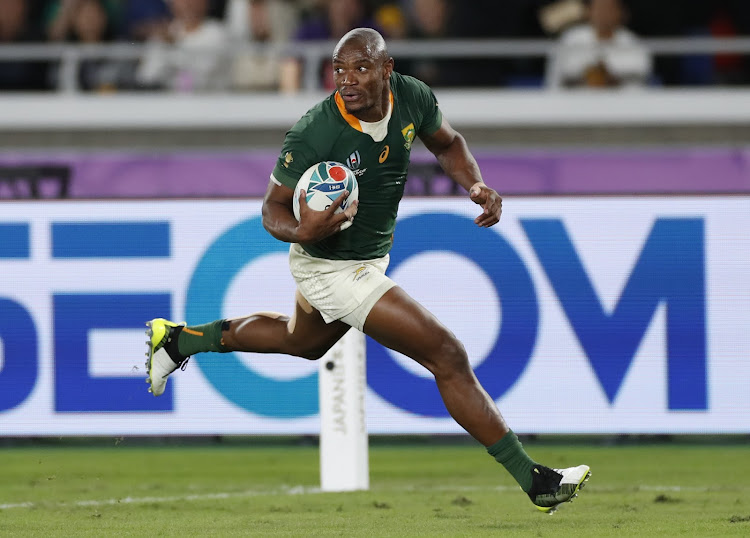 Makazole Mapimpi is the first Springboks player in the history of Springboks to score a try in a Rugby World Cup final.
Image: REUTERS/Peter Cziborra

In beating England 32-12 in Yokohama on Saturday‚ the Springboks not only became the second team to win three World Cups after New Zealand but they also became the first side to conquer the world after losing a pool stage game.

It was a disciplined and aggressively defensive performance that improved with each game.

Not a lot went right for the Boks in this game‚ including the officiating‚ but Kolbe was proving to be a big game player despite his frame.

He was unfortunate not to cross the line but his never-say-die attitude was to be a hallmark of SA’s defensive performances.

This is something the Boks got right against New Zealand‚ it was the scrum.

Joe Moody’ elbow helped him get away with murder three times in the first half‚ but the SA scrum served notice of its ability that would win them the tournament.

The prop was having a wonderful game against New Zealand which went unrewarded because of Jerome Garces’s officiating.

It was mortifying to see him limp off with an ankle injury that would end his tournament participation.

Such was SA’s depth at prop‚ he wasn’t missed‚ but it was good to see him in good spirits when he danced after the final.

SA had plenty of opportunities to bury New Zealand‚ but it just wasn’t happening for them in Yokohama.

Du Toit though was able to emerge from next to a ruck and crashed over from close range.

It was the first and not the last time SA’s physicality was rewarded.

After conceding two tries against New Zealand‚ the Boks embarked on two games against Italy and Namibia without having their tryline breached.

Those were two weak sides‚ but the Boks got their defensive alignment right. It was to serve them well through the tournament.

In the final pool game against Canada‚ the Boks got off to a flying start‚ but predictably slowed down in the second half.

Canada pressed for the elusive try and when it eventually came‚ it was from a mistake committed by Elton Jantjies and Frans Steyn.

Captain Kolisi‚ who was intent on making sure the Boks finished with a clean sheet‚ was upset with Jantjies and gave him a piece of his mind.

The Boks were to only concede one more try in three matches.

Japan had more than earned their quarterfinal spot after seeing off Ireland and Scotland‚ but SA’s ferocity was too much to handle in the quarterfinal.

Kotaro Matsushima‚ Japan’s try-scoring hero‚ tried to stop Mapimpi from scoring a try‚ but found himself being brushed off with disdainful ease and flew into the in-goal area before Mapimpi touched down.

8 - Damian de Allende’s persistence gets rewarded when it counts

Wales weren’t about to give SA a free pass into the final and it needed a man who loves the World Cup to push them through.

De Allende announced himself in the 2015 edition‚ and then had a rough four years.

He scored the critical try that forced Wales to play‚ but his hard work also encapsulated his importance to the SA cause.

25 phases and England were pushed back 25 meters.

Had England scored in the 31st minute having camped on the Bok line‚ the score would have been 8-6 with the conversion to come.

SA’s patience held out and the fight went out of England.

10 – The Lukhanyo Am and Mapimpi double act

Am was waiting for a chance to shine and make his team-mates look good.

Just when England thought they’d get into the game‚ he found a break‚ passed to Mapimpi‚ who chipped ahead.

Am caught the kick‚ pulled off an outrageous no-look pass that led to SA’s first try in a World Cup final. 25-12 was a bridge too far for England and so it proved.

Grassroots rugby in Mangaung gets a leg-up

The Mangaung Rugby Club became the most recent beneficiary of a sports betting company's efforts to lend a helping hand to communities in need with a ...
Sport
2 years ago

On the morning when Springbok captain Siya Kolisi readied to lead his team onto the field in Tokyo, a world away in the Eastern Cape township of ...
Sport
2 years ago
Next Article