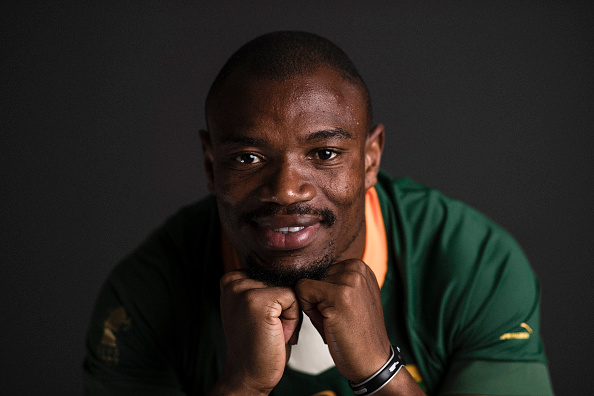 Rugby star Makazole Mapipmpi has been on the up since his first-division debut with Border Bulldogs in 2014. Half a decade later, Mapipmpi is a Springbok winger and one of the most formidable forces in the national team rugby.

The 29-year-old star is not only loved for his incredible speed and wily tactics on the field but the inspiring story behind his rise to stardom. Since the Springboks have made it to the finals of the Rugby World Cup, we’ve rounded up seven things you might not know about the star.

Mapimpi might be playing rugby at the highest level now, but there was a time the boy from Mdantsane, East London, and believed professional rugby was only for the privileged. Unlike many of his teammates, Mapipmpi didn’t go to a prestigious rugby school or play at annual rugby union tournaments like Craven Week. He tried for the Border Bulldogs under-19 team in 2009 but didn’t succeed. He made it a year later after stints with Mdantsane clubs Winter Rose and Swallows.

2. Team’s bankruptcy worked in his favour

His first-division rugby debut came after the professional side Border Bulldogs was declared bankrupt. Mapimpi was one of several amateur players brought into the provincial set-up at the start of 2014. Who would’ve thought a cost-saving measure would help launch of one of the national team’s most treasured stars?

3. He didn’t feel ready when the national team called

While a being asked to play for the national team is something most players dream about from the moment they hit the pitch, Mapimpi says he didn’t feel prepared when the Springboks called. He had just made the move from the first division to Vodacom Super Rugby by moving from the Kings to the Sharks. “When I got to the Sharks, I had to work hard to improve my aerial game and defence. I was fatigued. I didn’t feel like I was playing my best rugby and was a bit surprised when I got a call-up to play for the Boks,” he says in an interview with SA Rugby Mag.

4. He is a Player of the Year nominee

In 2017, Mapimpi was nominated for the BrightRock Players Choice Awards under the Players' Player of the Year category alongside Springbok captain Siya Kolisi (who ultimately won), Rosko Specman and Warren Whiteley. While he didn’t bag the coveted award, his career highs are all the trophies he needs. In 2018, the “rough diamond”, as he was described by Bok assistant coach Mzwandile Stick, was given the nod as the most improved player and he’s showing no sign of slowing down.

Here are seven things you need to know about the young talent who has been dubbed the new Thierry Henry.
S Mag
3 years ago

5. He has experienced loss

A scroll through Mapimpi’s Instagram feed shows he considers fellow players family but what most people don’t know is the star has lost his mother, brother and sister and doesn’t have immediate family cheering him on the sidelines. In an interview with New Frame, he admits when watching some of his teammates and opponents, he “feels the pain” of not having the support of close family.

One would assume a rugby star playing at international level would draw inspiration from players in the same league but not Mapimpi. In an interview with SA Rugby Mag he says he watches games across the board, looking for the small things players do that make them different and successful, which he tries to bring into his own game.

“For example, I saw something that I liked in a Varsity Cup game earlier this year. That’s how I think about making myself a stronger and more complete attacking player,” he says.

7. It’s bigger than the pitch for him

Having grown up in rural Eastern Cape, where rugby scouts hardly come searching for talent, Mapimpi recognises he is a great source of inspiration for many. “I’m not playing for myself. I’m playing for everyone from the Eastern Cape. I have a lot of people from the rural areas sending me messages on Facebook, saying that they’re praying for me and wishing me well.”

Somizi, Enhle Mbali & DJ Shimza: see what your fave celebs got up to this weekend

Your weekly guide to what your fave celebrities got up to over the weekend.
S Mag
2 years ago
Next Article