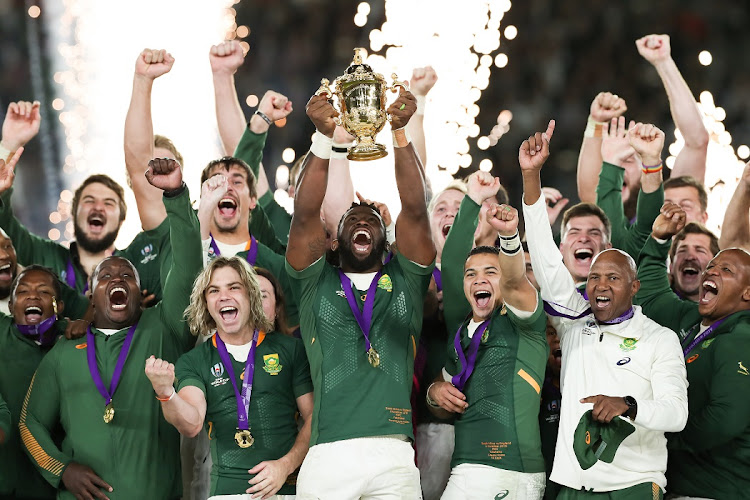 Duane Vermeulen sought to bring the significance of winning the Rugby World Cup into sharp focus when he spoke to captain Siya Kolisi after the final whistle of the Springboks’ 32-12 win over England.

“I told him it is fantastic to see him lifting the trophy,” said Vermeulen to Kolisi while they were still on the field.

“I said to him ‘In South Africa we have a lot of things not going our way. It is a lot of difficult things’. I just told ‘listen, there’s hope’.

“It is fantastic to see him lifting the cup. As a black captain that is a fantastic thing, especially with what is going on in South Africa. It is massive,” said Vermeulen, who typically did a lot of the heavy lifting in the Bok pack in this World Cup campaign.

The hope that Vermeulen spoke of is perhaps already embodied in the Bok team by Makazole Mapimpi. The left wing fought even longer odds than Kolisi to break into the big time.

Mapimpi found himself on the try-scoring sheet for the sixth time in the RWC. He finished one behind the competition’s top try-scorer, Wales’s Josh Adams. Mapimpi has now scored 14 tries in 14 Tests, a remarkable strike rate.

“I never thought I’d have a gold medal,” said an overwhelmed Mapimpi. “I think back to 2015 when I was playing for Border. I was watching the game back at home.

“I was watching [Bryan] Habana. I never thought the day would come that I would play in the next Rugby World Cup.”

When he touched down in the 66th minute he became the first Springbok to score a try in the World Cup final.

“I didn’t know I was the first guy to score in the final. I need to thank my teammates who helped me,” said Mapimpi about his try-scoring haul in the tournament.

Mapimpi was a little rough around the edges when he started playing top-flight rugby but he has worked hard and he’s had coaches who care. His ability under the high ball needed urgent attention and he has since risen to the challenge.

“It was tough. I was playing centre and I won’t lie, I worked with coach [Mzwandile] Stick,” said Mapimpi.

If Mapimpi was an unlikely hero at this tournament, at the other end of the spectrum is Frans Steyn who has his second Rugby World Cup winner’s medal after collecting his first in 2007. Steyn, however, has had to put aside some personal trauma before the tournament.

“It’s amazing of course. I’ve gone through so much since that World Cup. I lost my uncle a couple of weeks ago. I lost my brother a few years ago. So everything has changed a lot in that time from where I was then to where I am now.

“So, on the bus on the way here, that’s what I was thinking about. They were with me in here before tonight’s game,” said Steyn.