Duane Vermeulen fires back at the critics: Get off Faf de Klerk’s back! 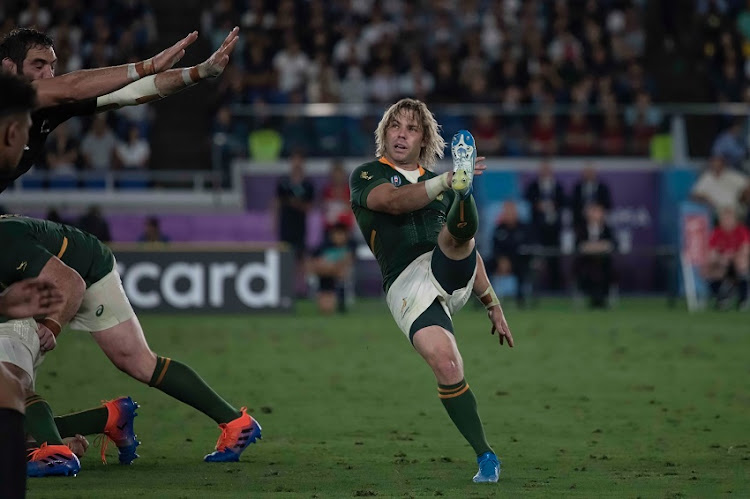 Faf de Klerk of the Springboks during the Rugby World Cup 2019 Pool B match between New Zealand and South Africa at International Stadium Yokohama on September 21, 2019 in Yokohama, Japan.
Image: Wessel Oosthuizen/Gallo Images

De Klerk was instrumental in the Springboks’ 26-3 win over Japan and scooped the man of the match award for his performance.

The scrumhalf was incisive and snappy behind‚ an admittedly marauding pack of forwards‚ as the Boks became the only non pool winning team to reach the last four.

Earlier in the tournament the scrumhalf took flak for his performance against New Zealand in Yokohama.

Often the criticism is raised that he kicks too much possession away but that is exactly the instruction under which he operates.

He could perhaps have executed those kicks better in Yokohama.

Vermeulen though has taken note of the criticism but it is perhaps a lot easier to get on De Klerk’s back than his.

“He is a guy who is always under pressure in South Africa‚" he said.

"I don’t want to say just the media‚ but the people out there kinda ask different questions‚ they say something different about him. ‘Why do we kick so much?’ We have a set game plan and we have to stick to that game plan.

“He knows how to play the game and he also keeps to that game plan. It doesn’t matter what the people say out there we know what we want to do and we prepare how to isolate a team who we play. It is fantastic to see him put in a man of the match performance‚ fantastic."

De Klerk was satisfied with his performance.

“I think I made a few errors that I can work on. Overall I was happy with my performance but you can always be better than what you played‚” said the scrumhalf.

Apart from a solid overall performance De Klerk also benefited from arguably the most destructive maul at this Rugby World Cup.

The Boks marched the Japan pack back over 40m before Malcolm Marx peeled away and passed to the speeding De Klerk who ran in to score.

De Klerk delighted in the moment.

“The one where I scored my try was actually amazing. I looked at Lood (de Jager) and started laughing out of disbelief out of how the maul was going. How long they were keeping it in.

"Lood just kept saying ‘keep it in‚ keep it in’. I started laughing because it was amazing.

“Credit must go to the forwards in that moment of pressure‚ to drive out of our own half and getting a try from it. It was a massive game changer for us‚” said De Klerk.