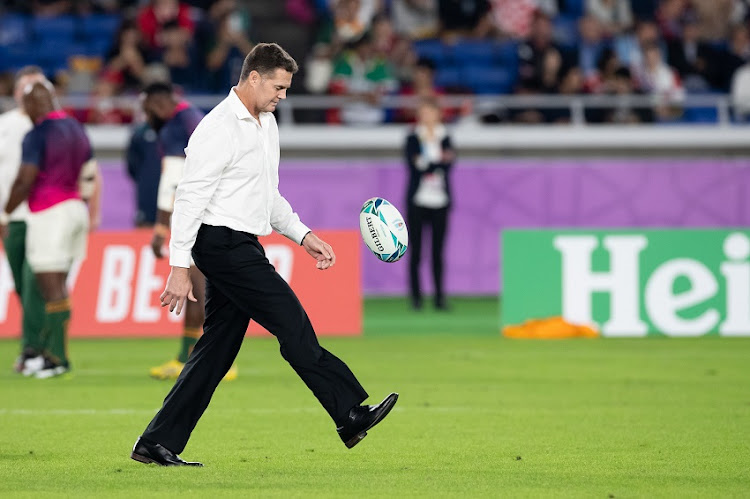 Of course‚ their job is far from done as they head into Saturday’s final against a marauding England team but Erasmus expressed confidence in his team by making just one much anticipated change.

Right wing Cheslin Kolbe has been restored to fitness from an ankle injury which means S’bu Nkosi has to step out of the match day 23. Tough on him‚ but great for Kolbe.

This is a familiar line-up. It was first rolled up against Italy in the pool stages and again in the quarterfinal‚ before Kolbe got injured for the semifinal.

Earlier this week Erasmus effectively named the squad by saying Kolbe would return as the only change and was challenged by an English journalist who wondered why a coach on the eve of a big final would show his hand so early.

“I’m not bluffing‚” Erasmus said with a smile.

Changing the team or suddenly mixing things up would be a betrayal of what the coach has tried to achieve over the last 18 months.

Erasmus has created an environment in which consistency is essential and it is a trait by which he must lead.

It is consistency that the Springboks need at this most crucial juncture.

“We are process driven and we like to get consistency‚” said Nienaber.

“We like consistency on the field and off it in our preparation. We are a lot more consistent in the things we do from a Sunday to a Friday.

Erasmus doesn’t need smoke and mirrors. He is confident in his players‚ the albeit paper thin Bok playbook and indeed‚ the specific plan he has hatched for England.

Although the Bok style will be largely the same in the final‚ it doesn’t mean there won’t be the odd rabbit from a hat.

“I don’t think the challenge is which team is most up for the game psychologically or mentally‚ because both teams would be up for it.

"I think it is about who can tactically handle the game the best‚” said Erasmus.

The tactical deviations may even involve Kolbe.

“Against England‚ the way they defend‚ it is something we definitely need‚” said Erasmus.

And who’s to say Frans Steyn‚ who will start his second World Cup final from the bench‚ hasn’t been primed to kick England in the teeth at the death.

The Springbok team to play England is: